Amid the fallout from the credit crisis and the growing economic storm, itÃ¢â‚¬â„¢s inevitable that litigation will follow. What started with subprime has become potentially a much bigger litigation net for enterprising attorneys. Fellow blogger Kevin LaCroix over at the D&O Diary addresses this issue in a recent posting titled Ã¢â‚¬Å“Litigation Wave Inflection Point?Ã¢â‚¬  In it he notes that shareholder lawsuits have already been filed against the directors and officers of some of the most prominent companies affected by recent events. He then points to additional developments that suggest a possible new wave of credit crisis lawsuits where the defendant companies are not themselves directly affected by the credit crisis fallout, but instead suffer from exposure to other companies that have been directly affected. The ultimate wildcard in all of this, according to LaCroix, is the impact that the current proposed federal bailout will have on litigation going forward. Insurers will be closely monitoring all these developments. Check out further I.I.I. information on the liability system.Ã‚

On the eve of the expiry of the current National Flood Insurance Program (NFIP) a short-term extension of the federal program passed the Senate over the weekend.Ã‚  This means that authorization of the NFIP isÃ‚  extended until March whenÃ‚  furtherÃ‚  action onÃ‚  long-term reform of the program is expected. Check outÃ‚  today’s online article at National Underwriter by Arthur D. Postal forÃ‚  more information.Ã‚  While several billsÃ‚  reforming theÃ‚  NFIP have been proposed, the House and Senate have yet to reach agreement onÃ‚  reauthorization of the program. As Hurricane Kyle brushed by the coast of Maine this weekend, bringing as much as 5.5 inches of rain over three days, it was a timely reminder of the importance of flood insurance. At the end of 2007, the NFIP had some 5.7 million policies in force. However,Ã‚  a 2008 poll by the I.I.I. found that only 17 percent of Americans have a flood insurance policy. Check out further I.I.I. facts and stats on flood insurance.Ã‚

Insurers Allianz, The Hartford, Travelers and reinsurer Munich Re have been recognized for their professional approach to climate change disclosure by the Carbon Disclosure Project (CDP). Allianz, The Hartford and Munich Re are among 67 Global 500 companies to have been named to the CDPÃ¢â‚¬â„¢s Global Carbon Disclosure Leadership Index. The index, compiled by PricewaterhouseCoopers (PwC) on behalf of CDP, grades companies on their responses to a questionnaire based on their reporting of greenhouse gas emissions, associated risks and opportunities as well as emissions reduction targets. U.S. S&P 500 companies were also graded and Travelers, as well as The Hartford,Ã‚  have beenÃ‚  named to the U.S. Carbon Disclosure leadership Index. Some 74 percent of global 500 companies reporting to CDP are now reporting emissions reduction targets, an indication they are increasingly taking climate change mitigation seriously. The CDP represents some 385 global institutional investors with more than $57 trillion in assets under management.

If youÃ¢â‚¬â„¢ve been wondering what the implications might be for insurers of the federal governmentÃ¢â‚¬â„¢s proposed $700 billion financial bailout plan, a report presented by I.I.I. president Dr. Robert Hartwig before the Excess/Surplus Lines Claims Association focuses on this very topic. Called Ã¢â‚¬Å“The Financial Crisis & the P/C Insurance Industry: Challenges Amid the Economic StormÃ¢â‚¬ , the report also includes a discussion of AIGÃ¢â‚¬â„¢s $85 billion loan from the Fed, detailing the structure of the agreement. Another section gives an overview of excess and surplus lines market trends.

The unregulated $62 trillion credit default swap (CDS) market Ã¢â‚¬“ the Achilles heel of the emerging financial crisis Ã¢â‚¬“ yesterday was served notice by New York State that part of the sector will be subject to regulation for the first time by the state insurance department. Announcing the move, Governor Paterson urged the federal government to regulate the rest of the credit default swap market. The new guidelines, which will take effect from January 1, 2009, establish that certain credit swaps are insurance contracts, and therefore subject to state regulation. This reverses a decision by the state insurance department in 2000 that all CDS were not insurance. The insurance department has also issued new best practices for financial guarantee insurers,Ã‚  includingÃ‚  measures designed to limit risks for financial guarantee insurers and increasing the minimum amount of capital and reserves they must maintain.Ã‚

The dangers of text-messaging while driving a vehicle, at work, even crossing the street are making the headlines both in the U.S. and overseas. A September 19, 2008 New York Times article by Jennifer Steinhauer and Laura M Holson, focuses on the danger texting can pose by distracting users. The issue has been receiving widespread attention following the September 12 train collision in California that left 25 dead. Last week the National Transportation Safety Board (NTSB) confirmed it is investigating how text messaging by the Metrolink trainÃ¢â‚¬â„¢s engineer may have affected his operation of the train.

Meanwhile, new research conducted by the UKÃ¢â‚¬â„¢s Transport Research Laboratory for the Royal Automobile Club Foundation has found that texting behind the wheel impairs driving skills more than being drunk or high. Reaction times deteriorated by over one-third (35 percent). This was worse than alcohol at the legal limit (12 percent slower) and driving under the influence of cannabis (21 percent slower). In addition, drivers drifted out of their lane more often, with steering control 91 percent worse, compared to 35 percent worse when under the influence of cannabis. The ability to maintain a safe following distance also fell. Despite the danger, 48 percent of UK drivers aged 18-24 admit to using short message services (SMS) while driving. Check out I.I.I. information on auto crashes.

Insurance Information Institute (I.I.I.) colleagues, family and friends joined together to raise funds and to participate in last SundayÃ¢â‚¬â„¢s Susan G Komen New York City Race for the Cure 5K walk/run. First held in 1991, the race is now one of the largest in New York City and this year more than 25,000Ã‚  took toÃ‚  the routeÃ‚  in Central Park. The Race for the Cure series raises significant funds and awareness for the fight against breast cancer, celebrates breast cancer survivorship, and honors those who have lost their battle with the disease. Despite 90 degree temperatures, IÃ¢â‚¬â„¢m pleased to report that all I.I.I. team members made it to the finish line. Donations are still coming in, but the team expects to raise close to $4,000 in total. Check out our team picture below. 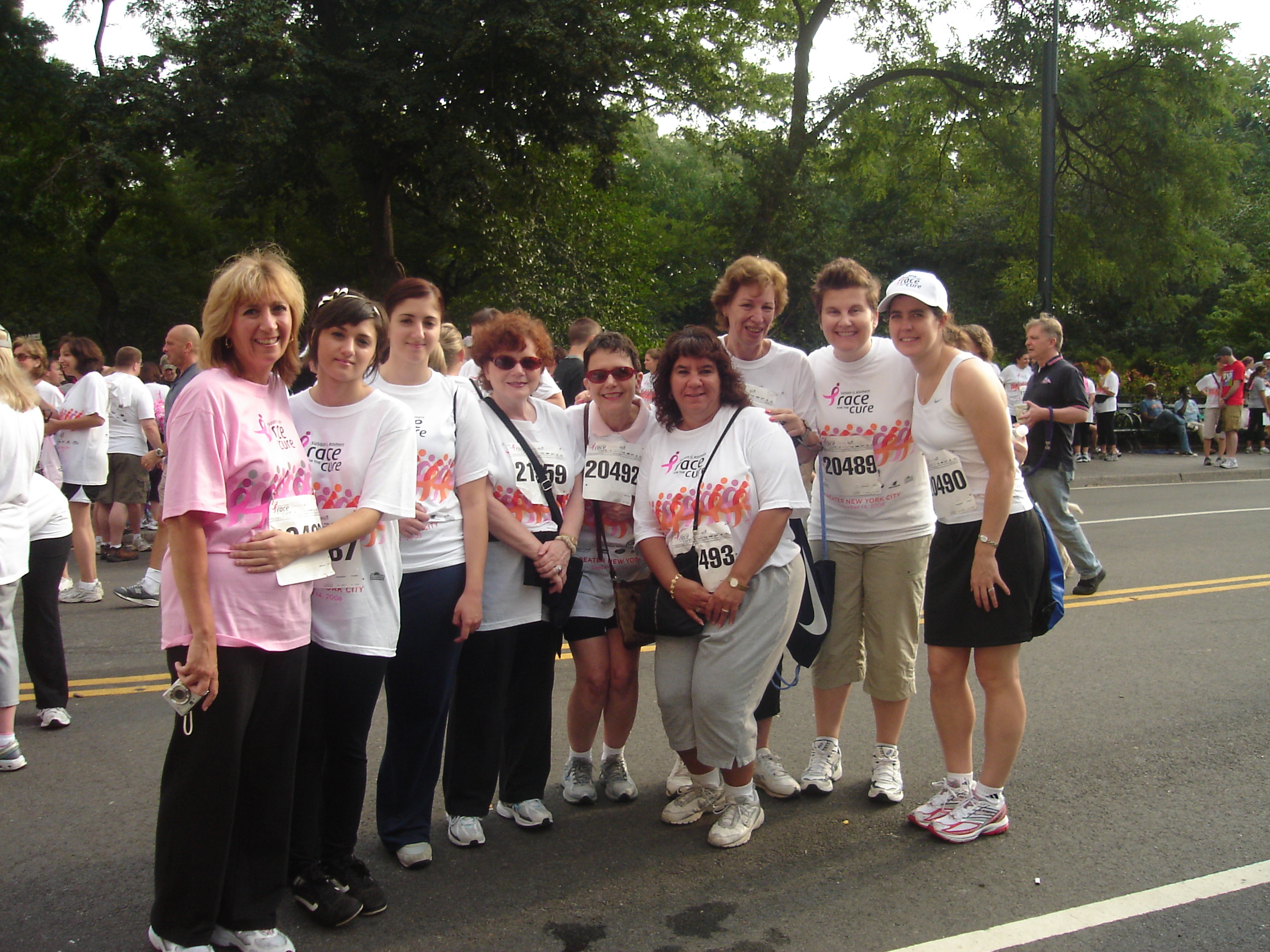 Marine and energy underwriters from around the world gathered in Vancouver this week for the annual conference of the International Union of Marine Insurance (IUMI). In the wake of Hurricanes Gustav and Ike there was much to talk about. A September 15 article in LloydÃ¢â‚¬â„¢s List by James Brewer put preliminary estimates of losses to energy insurers from the two hurricanes at up to $800 million. This was based on an estimate from the IUMI energy and offshore committee chairman that the losses might cost between 10 percent and 30 percent of the energy marketÃ¢â‚¬â„¢s premium volume. Total global energy insurance income for 2008 is around $2.8 billion, the article notes.

As of September 15, the Minerals Management Service (MMS) reported that 28 of the 3,800 offshore oil and gas production platforms in the Gulf of Mexico have been destroyed by Ike, and several other platforms significantly damaged. In addition, three jack-up drilling rigs were reported destroyed and one with extensive damage. On a lighter note, preliminary reports from the MMS on Hurricane Gustav indicate only minor damage to oil and gas infrastructure in the Gulf. If accurate, the losses from Gustav and Ike though substantial, pale in comparison to the $5 billion cost to energy insurers (offshore losses only)Ã‚  from Hurricanes Katrina ($2 billion) and Rita ($3 billion) in 2005.Ã‚

Amid the financial markets turmoil of recent months andÃ‚  developments at certain multinational insurers, the annual conference of the International Association of Insurance Supervisors (IAIS) which will take place in Budapest from October 14 through 17 is likely to see some lively discussions. We note that this yearÃ¢â‚¬â„¢s conference is focused on the general topic Ã¢â‚¬Å“Insurance and the Globalisation of Financial Services: Challenges for Worldwide Regulation and SupervisionÃ¢â‚¬ . Among the issues to be covered: cooperation and transparency in crisis situations; the impact of future solvency standards; supervision of insurance groups and market conduct. Check out I.I.I. information on proposed international standards in accounting.Ã‚

Given current concerns about the state of the economy, itÃ¢â‚¬â„¢s a good time to review the myriad ways in which both property/casualty and life insurance contribute to state, local and national economies. The 2008 edition of the I.I.I. online publication Ã¢â‚¬Å“A Firm FoundationÃ¢â‚¬  shows how insurersÃ¢â‚¬â„¢ support of the economy goes far beyond their core function of helping to manage risk. Yes, the insurance industry plays a vital role in helping individuals and businesses prepare for and recover from the potentially devastating effects of catastrophe, such as hurricanes or earthquakes. But insurers are also major employers, taxpayers and investors. Check out state-specific editions of A Firm Foundation for latest numbers highlighting the key role of the industry in state economies.Ã‚