Weather Underground put it in boldface (scroll down a bit), so I think it is worth a pull-quote:

There is very little doubt that Texas is in for one of the worst rainfall and flood events in its history. The resulting rainfall is very likely to produce widespread, devastating, and potentially catastrophic flooding.

Most dire is the outlook for Houston, “given that city’s vast size and population and its well-known vulnerability to flooding.”

Good luck to all there and throughout Coastal Texas, and pardon the near-cliche, but don’t drive into water – most flood victims, I hear, are found in their vehicles.

If your home was damaged by Hurricane Harvey and you have insurance, you will likely be filing a claim. We at I.I.I. have some tips to help the process go more smoothly:

We told the media about this via a press release, which is a bit more detailed.  You can find that here. It also has information on hurricane deductibles, which I will write about in a separate post.

Many of the homeowners and businesses in the path of Hurricane Harvey get hurricane protection for their properties from the Texas Windstorm Insurance Association (TWIA) instead of from either a traditional homeowners or business policy.

Created by the state Legislature in the 1970s, TWIA is a privately funded property insurer that provides windstorm and hail coverage to Texas homeowners and businesses in numerous coastal counties.

Flood coverage for homeowners and businesses must be acquired separately from either FEMA’s National Flood Insurance Program (NFIP) or a private flood insurer.

TWIA claims are paid primarily from two revenue sources: the premiums TWIA collects from its policyholders and the money TWIA can access from its Catastrophe Reserve Trust Fund (CRTF).  The CRTF consists of funds TWIA has accumulated over time.  If TWIA needs additional money to pay claims, it is also authorized to use the money every Texas-licensed property insurer pays to TWIA in the form of annual assessments. It has a variety of other funding mechanisms that give it the ability to handle up to $4.9 billion in claims, which right now seems to be plenty for this particular storm.

TWIA issues policies in 14  coastal counties as well as portions of Harris County. TWIA writes the wind/hail for about 60% of the policies in that region, the rest being covered by private companies.

If you are insured by TWIA, you’d know it. It is an insurer of “last resort.” At least two traditional insurers would have to have refused to cover your property for wind risk, and your agent would have notified you of that fact and sent you to TWIA to seek coverage.

Updated at 3:50 p.m. Eastern 8/26 to show the percentage of policies held by TWIA in the coastal region.

Updated at 5 p.m. Eastern 8/26 to give more detail on TWIA’s funding mechanisms and how people can know whether TWIA is their insurer.

Hurricane Harvey is expected to bring heavy rainfall and strong winds to Texas and Louisiana over the next few days.

The National Transportation Safety Board is convening in D.C. on Tuesday, Sept. 12, at 9:30 a.m., to discuss the fatal Tesla crash which occurred last year in Florida. 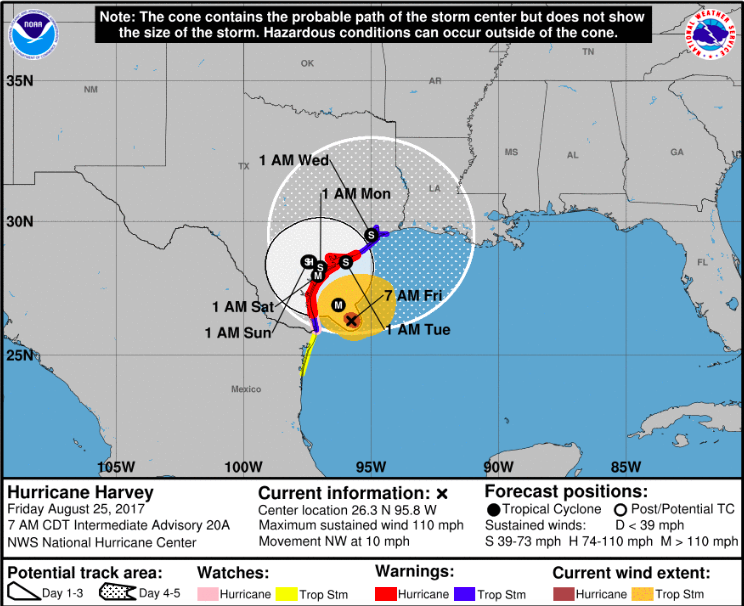 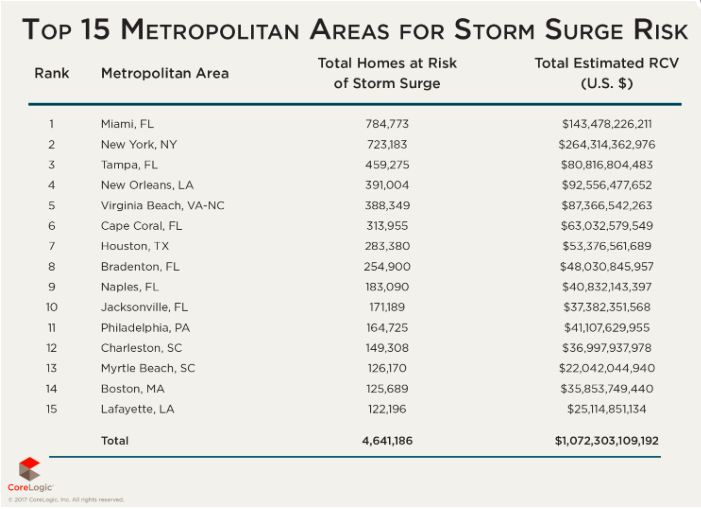 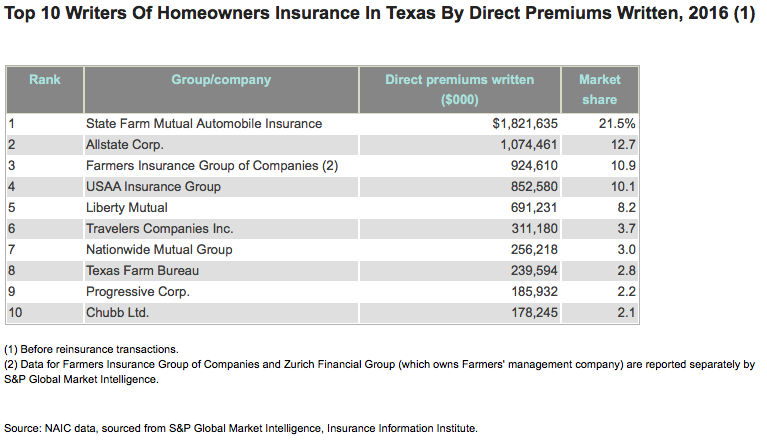 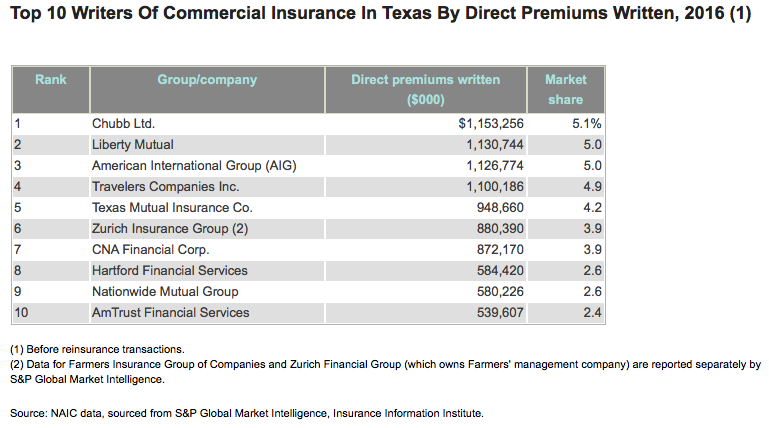 Every year the state of Arkansas surveys insurers to determine the impact of the use of credit scores in the rates that consumers pay. Here are results from last year’s policies.

During 2016 for all personal lines coverages:

More information at the link. 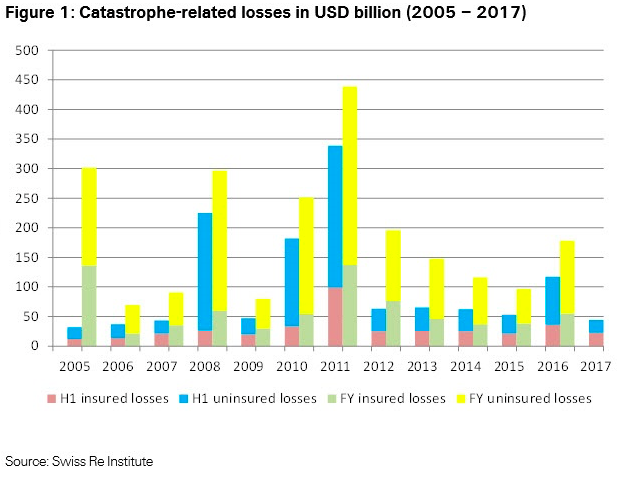 The first total solar eclipse to sweep across the entire country since 1918 will happen on Monday and understandably there are some insurance issues that arise:

Business Insurance, via today’s I.I.I. Daily, explains what a company needs to know about workers compensation issues that may arise if it is hosting a viewing party.

Amy K. Harper, a director at the National Safety Council, said, “An employer should provide ISO 12312-2 compliant viewing glasses if they are encouraging or hosting a viewing party.” Employers should also be familiar with NASA’s safety guidelines that suggest people not look directly at the sun. Employees injured using a camera, binoculars or telescope to look directly at the sun can cause eye injuries in which employees may be covered under workers compensation.

Erie Insurance brings us a solar eclipse safety check: 1. Don’t look directly at the sun; 2. Keep your eyes on the road; 3. Renting out your home? Check your liability coverage. 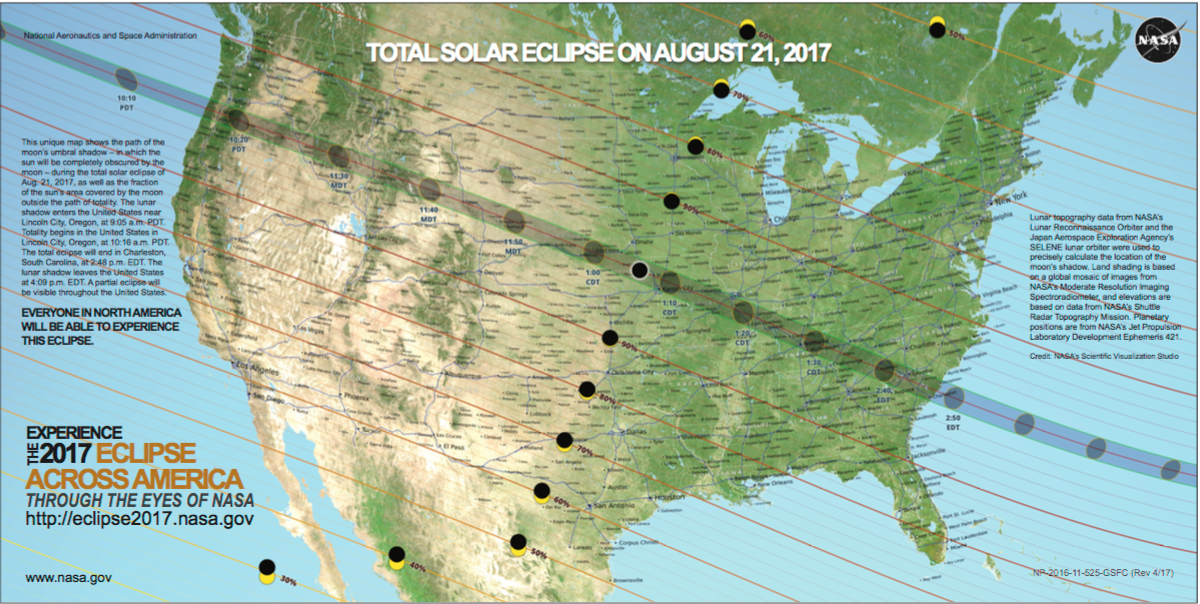 The I.I.I.’s Michael Barry briefs our membership every week on key insurance related stories. Here are some highlights.

Insurance coverage for riot-caused damage became a media issue this week after a 32-year-old woman was killed, and scores were injured, in Charlottesville amid violent, dueling protests centered on the removal of Confederate General Robert E. Lee’s statue.

Reporters want to know if the number of car accidents might rise on Monday, Aug. 21, when the population soars in 14 U.S. states, from Oregon to South Carolina (see page 4), as tourists flock to witness a total solar eclipse.  It is the first one to be visible in the U.S. in 38 years.

Gert became the second hurricane of 2017 to develop in the Atlantic Basin but it never came near the U.S. before drifting into the middle of the ocean.