The New Yorker magazine reported recently on the work of the Buoyant Foundation Project, an organization that provides architectural flood mitigation solutions for vulnerable populations.

Amphibious architecture allows an otherwise-ordinary structure to float on the surface of rising floodwater. An amphibious foundation retains a home’s connection to the ground by resting firmly on the earth under usual circumstances, but allows a house to float when flooding occurs.

A buoyant foundation is specifically designed to be retrofitted to an existing house that is already slightly elevated off the ground and supported on short piers.  Under the house the foundation’s buoyancy blocks provide flotation, vertical guideposts prevent the house from floating away, and a frame ties everything together.  Any house that can be elevated can be made amphibious.

Amphibious retrofitting has not yet gained widespread acceptance, and buildings with amphibious foundations are not eligible for subsidized policies offered by the National Flood Insurance Program.

The National Flood Insurance Program returned to the private reinsurance market for 2018, paying $235 million for $1.458 billion coverage from a single flood event.

The coverage limit is 40 percent more than what the NFIP purchased last year ($1.042 billion), and the premium is 56 percent higher than the $150 million NFIP paid last year. The 2017 treaty was the first significant foray for the government insurer into the private sector, and the government recovered the entire $1.042 billion from Hurricane Harvey’s floods.

Both last year and this, the NFIP gets no protection for the first $4 billion of any flood event – the $4 billion acts similar to a deductible on an insurance policy. After that, the worse the flood gets, the more NFIP recovers, and this year the maximum is $1.458 billion.

NFIP explains the structure in a press release, with program Director Roy E. Wright adding his thoughts in a blog post.

The I.I.I. has more information on floods and flood insurance here.

With a snowstorm headed up the Atlantic Seaboard, the Weather Channel offered details on the East Coast states to be impacted by this week’s extreme cold.

California’s Thomas Fire is now the largest in the state’s history, having burned an estimated 282,000 acres in Santa Barbara and Ventura counties since the blaze began on December 4, 2017.

Global insurers purchased more U.S. asset managers in 2017 than in any year in two-plus decades, The Wall Street Journal reported, in its December 30-31, 2017 Weekend print edition.

Munich Re has released its 2017 catastrophe review, and disaster related insured losses for the year are the highest on record at $135 billion.

The record losses are driven by the costliest hurricane season ever in the United States and widespread flooding in South Asia. Overall losses, including uninsured damage, came to $330 billion.

The United States made up about 50 percent of global insured losses in 2017, compared with just over 30 percent on average. Hurricane Harvey, which made landfall in Texas in August, was the costliest natural disaster of 2017, causing losses of $85 billion. Together with Hurricanes Irma and Maria, the 2017 hurricane season caused the most damage ever, with losses reaching $215 billion.

The United States also suffered a devastating wildfire season and at least five severe thunderstorms across the country, accompanied by tornadoes and hail.

Mark Bove, a senior research meteorologist at Munich Re, said in a New York Times interview that losses jumped in the United States because so many of the disasters hit highly populated areas: the Houston bay area, South Florida, Puerto Rico. It’s a trend that he expects to continue. 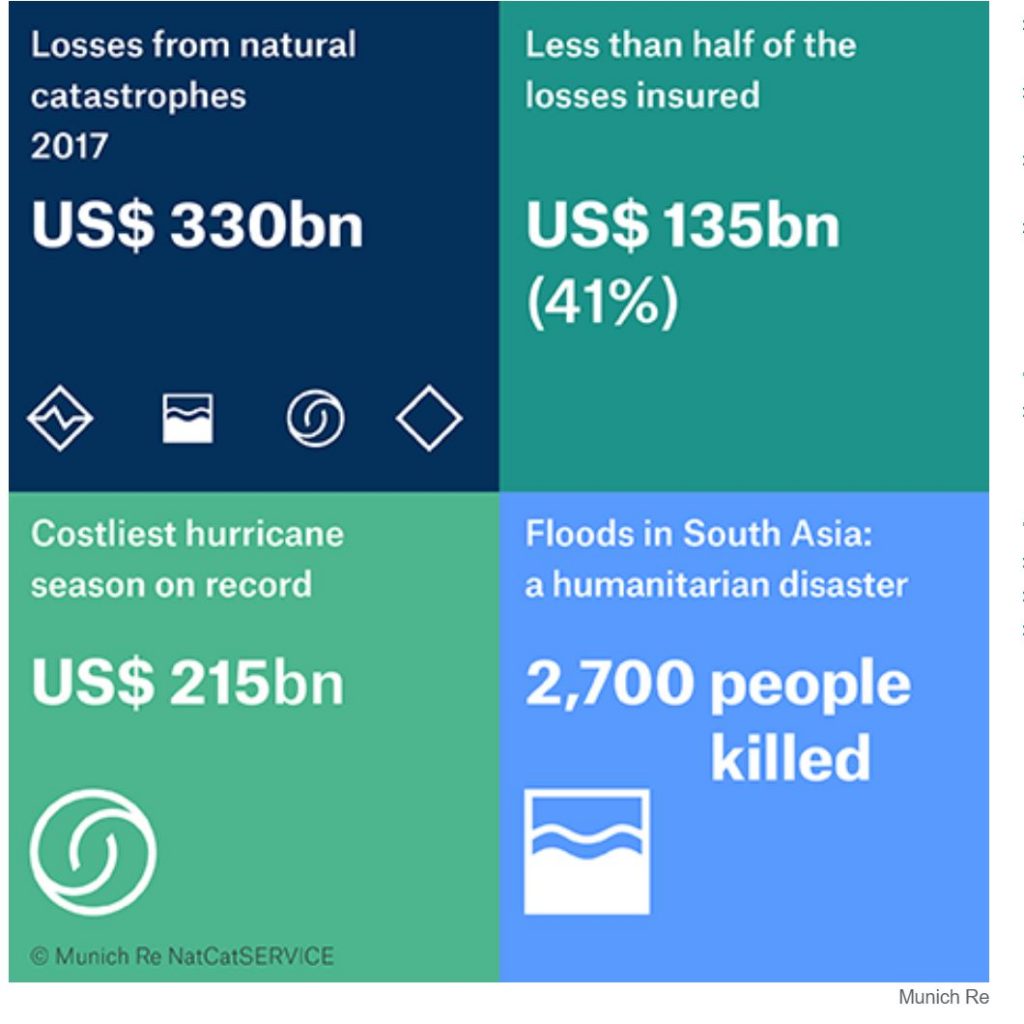 The I.I.I. has data on natural disasters here.

Replacing the choice to opt-in with the choice to opt-out has proven to be one of the most successful policies to come out of applied behavioral economics. For example, in France citizens are automatically enrolled in the organ donor registry unless they choose to “opt-out.” Only 150,000 people, out of France’s approximately 66 million, have opted out of the program.

A recent McKinsey report suggests that making flood an insured risk on standard homeowners policies in high-risk states and giving homeowners the option to opt-out could generate as much as $50 billion annually in untapped revenue.

Policyholders could decide to opt out of flood insurance, but experience from several markets (terrorism insurance, voluntary retirement contribution, etc.) show many will not.

McKinsey analyzed take up rates for flood insurance in areas most affected by the three Category 4 hurricanes that recently made landfall in the United States — Harvey, Irma and Maria — and said as many as 80 percent of Texas, 60 percent of Florida and 99 percent of Puerto Rico homeowners lacked flood insurance.

“The current opt-in choice design clearly does not work… millions of residents and small business owners are unprotected. The default option—not doing anything—should be one that protects them.” Say the authors of the report.