On September 11, 2001 terrorists hijacked commercial airliners and flew them into the World Trade Center towers and the Pentagon. The attacks remain the deadliest and most expensive terrorist incidents in U.S. history, with insurance losses totaling about $47.0 billion in 2019 dollars, according to I.I.I. estimates.

In the wake of the attacks the U.S. Congress enacted the Terrorism Risk Insurance Act of 2002 (TRIA). The act creating a federal backstop for catastrophic terrorism losses that is designed to keep terrorism risk insurance available and affordable. It was renewed in 2005, 2007 and again in 2015. The act is set to expire on December 31, 2020.

Over the next months the Triple-I Blog will run stories featuring key participants in the terrorism risk insurance market and highlight news stories from our database from the periods immediately following 9/11 (before TRIA) and 2015 (when TRIA briefly lapsed).

Below is an abstract from the I.I.I. database citing a BestWeek article from October 1, 2001. The article refers to the fact that the heaviest insured losses were absorbed by foreign and domestic reinsurers, the insurers of insurance companies. Because of the lack of public data on, or modeling of, the scope and nature of the terrorism risk, reinsurers felt unable to accurately price for such risks and largely withdrew from the market for terrorism risk insurance in the months following September 11, 2001 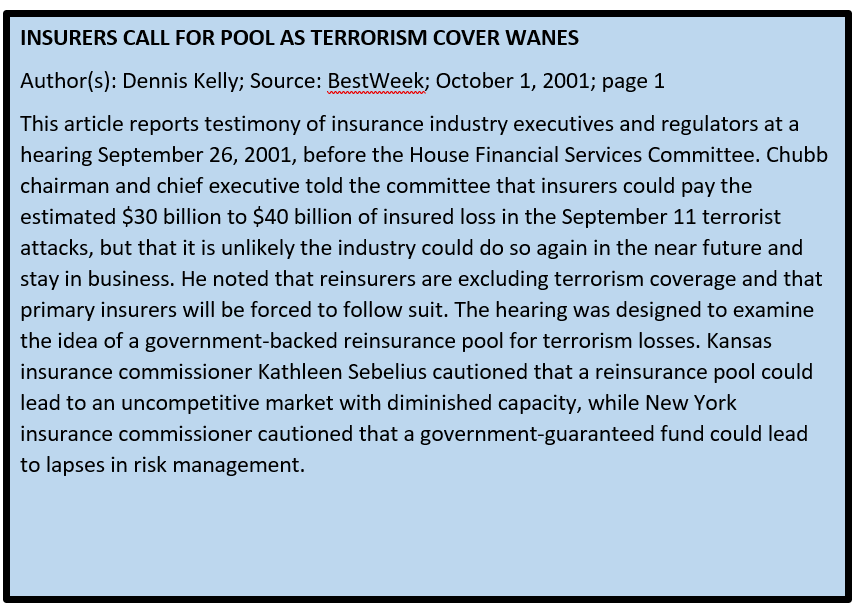 For more on the importance of a federal terrorism backstop read the I.I.I. report, A World Without TRIA: Incalculable Risk.