New Zealand’s earthquake last week occurred almost exactly a year after a massive quake struck near Valparaiso Concepcion, Chile. The anniversary of the latter prompted Aon to publish a retrospective, all of which points up the importance of having earthquake insurance. (h/t Risk Market News)

Both were major events, with the cat modeling firm AIR estimating New Zealand’s losses between $3.5 billion and $8 billion. Losses from the Chilean quake top $8 billion, according to Aon.

Despite significant losses from the quake, the Aon report pointed to important successes in the aftermath of the Chilean event. The insurance system worked effectively. No insurers faced insolvency or bankruptcy. Claims have been handled efficiently – 95 percent of residential claims and 80 percent of commercial claims have been settled. Reinsurers – which sell protection so insurers can hedge their risk – filled their role well.

But challenges remain. Many personal-lines claimants did not understand their policies had deductibles. The sheer volume of claims (nearly 250,000) created bottlenecks, especially since government regulations require registered claims adjusters. There were issues in which different policies had overlapping coverage. And the market lacks a standard policy, complicating the settlement of claims.

Aon also praised the regulatory environment. Regulators require insurers to track their earthquake exposure and purchase reinsurance accordingly, which in this case helped guarantee that insurers could meet their obligations.

Last year, a I.I.I. white paper on the state risk pool, the California Earthquake Authority, noted “the percentage of policyholders buying the coverage appears to rise and fall depending on how long ago the last significant earthquake occurred.” In 1996, about one-third of residential policies in the state purchased earthquake cover. Today, 12 percent do.

The out-of-sight, out-of-mind problem isn’t unique to California. Last week, Missouri’s Department of Insurance noted similar drop-offs in St. Louis and counties near the New Madrid fault, site of several massive earthquakes 200 years ago. I’ve put all the information into a chart: 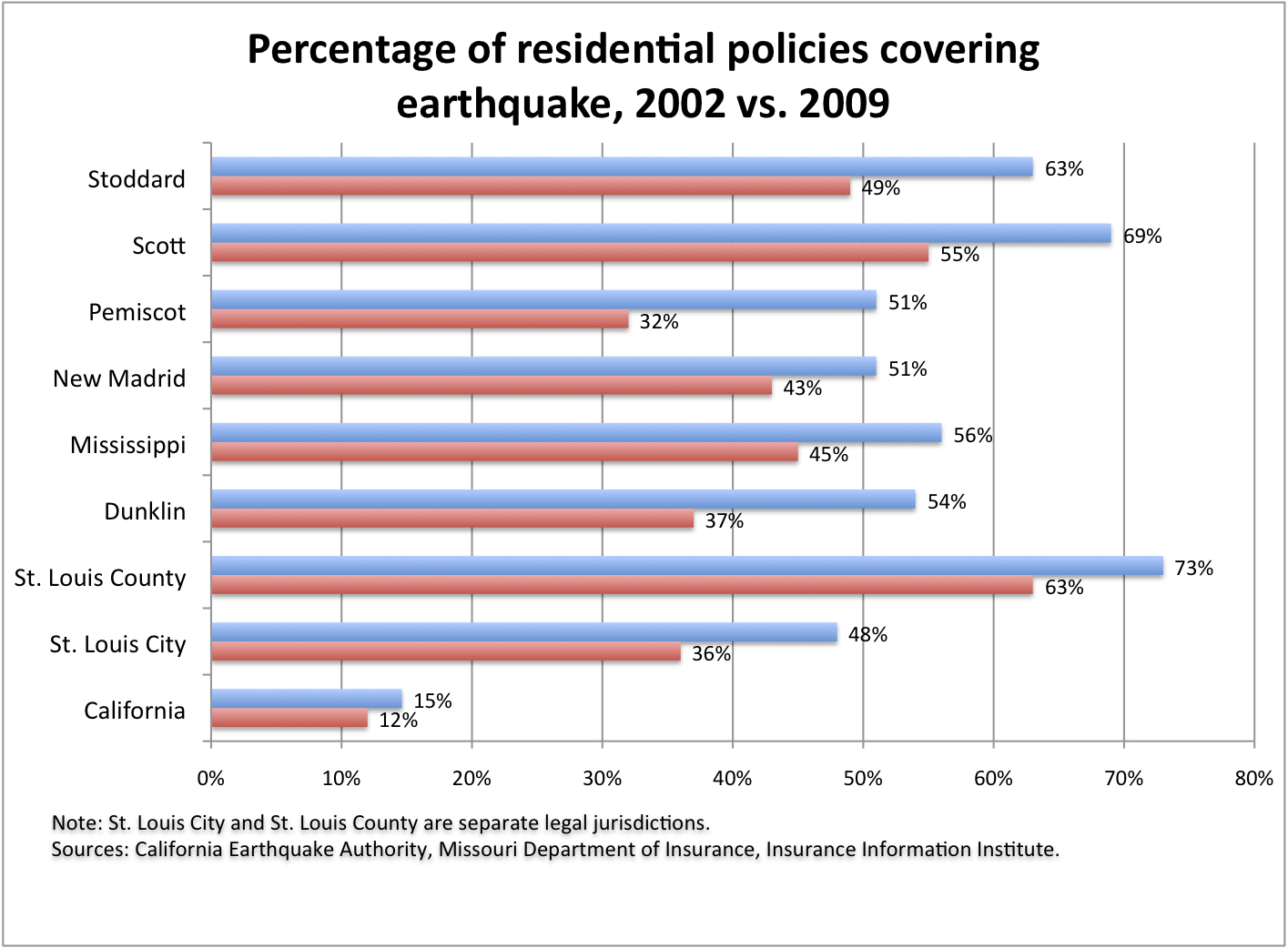 I got information on California’s take-up rate here.

You can see that California’s take-up rate is considerably lower than the selected Missouri locations. But all of them are declining.

Meanwhile, Missouri’s neighbor to the south, Arkansas, had two sets of widely felt earthquakes in February, according to the U.S. Geological Survey, and California had a notable shake Jan. 8. Thankfully, all were minor.

New Zealand’s second earthquake in five months is a human tragedy – with more than 100 confirmed dead so far, and more than 200 missing. It could also be the worst insurance catastrophe since Hurricane Ike hit Texas in 2008. 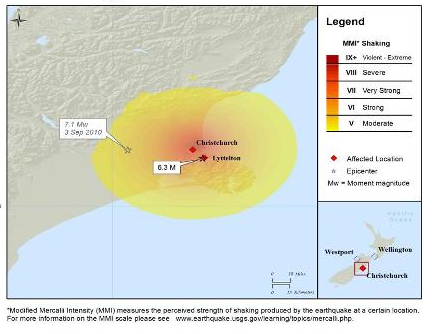 Guy Carpenter published the attached map showing the epicenter and shake zone from this week’s earthquake.

In comparison, Ike cost $12.6 billion in the U.S. alone, and $20 billion including all Caribbean basin countries, with all numbers updated for inflation. Last year’s earthquake in Chile totaled about $8 billion in insured losses.

This week’s earthquake was technically an aftershock from a September earthquake, though all parties appear to be treating them as separate events in terms of insurance coverage. AIR’s original estimate for that event was $2 billion to $4.5 billion. Actual industry losses have come in at the top of that range.

It’s important to note AIR’s estimates exclude demand surge – the phenomenon in which construction costs soar because of shortages in labor and raw materials.

This week’s earthquake was considerably smaller than September’s – magnitude 6.3, vs. 7.1, according to the U.S. Geological Survey, which monitors worldwide seismic activity. But the recent event’s epicenter was just three miles from Christchurch, a city of 400,000 and was relatively shallow, just 2.5 miles beneath the earth’s surface.

New Zealand insures earthquake and other natural disasters through a government-related Earthquake Commission, according to a I.I.I. press release. In existence since 1945, it has built up assets of more than $4 billion in U.S. dollars. It also purchases reinsurance in the private worldwide market, New Zealand Prime Minister John Key told that country’s National Business Review.

A I.I.I. list of the largest natural catastrophes worldwide can be found here.

Oscar night creeps ever closer – it’s Sunday – so the drama builds for the magic moment when the envelope opens and we find out which movie is Best Picture.

In the insurance version, though, the drama is over – Fireman’s Fund earlier this month named Salt the riskiest movie of 2010. The Fund insures 80 percent of Hollywood productions, notes the Wall Street Journal, so can be considered an authority on the topic.

Salt tells the story of a CIA agent -Angelina Jolie – who goes on the run after being accused of being a Russian spy. But this is Hollywood, so when she goes on the run, she does a lot more than run – lots of chases, crashes, fights and general femme fatale-ing.

And here’s why it was so risky: Ms. Jolie, reportedly paid more than $20 million for the role, did her own stunts. To get an idea, here’s the action-packed trailer:

So what you see the character Salt do, Ms. Jolie, a daredevil mother of six, actually did:

And had she, say, broken a leg, it would have been a bigger deal than your typical workers comp claim. Production itself could slow down or stop, but production costs would roll on.

Companies insure against actors’ injuries by purchasing cast coverage, which basically pays for production costs if an important artist is hurt or killed. Other typical coverages protect against loss of props, damage to property while on location, and – my favorite – negative coverage, which involves faulty filming materials, not tabloid stories.

The riskiest scene – not in the trailer – involved filming the actress on a building ledge on a gloomy, windy day. The Fund’s Paul Holehouse (a senior risk specialist) told us: The wire work and climbing outside of the New York building required a massive rigging effort to protect the historical buildings and create a safe catch area with proper flying harnesses.

For fights and scenes with weapons, extra care has to be taken to protect the actor’s face. One unducked punch could close up shop.

On tricky shoots, underwriters work with the creative types to minimize risk while achieving the director’s artistic vision.

Concerned about potential litigation and regulatory investigations, a growing number of companies are seeking more directors and officers (D&O) coverage, according to a Towers Watson survey released today.

D&O insurance protects the directors and officers of an organization against losses in case they are sued for their actions overseeing the organization. According to the survey, 21% of respondents are increasing policy limits, vs. 12% in the prior survey, in 2008. Meanwhile, only 3% seek lower limits.

Ã¢â‚¬Å“Clearly, companies are reacting to the fact that D&O liability exposures facing directors and officers are arguably at an all-time high,Ã¢â‚¬  said Larry Racioppo of the executive liability group in Towers WatsonÃ¢â‚¬â„¢s brokerage business. Ã¢â‚¬Å“Insurance buyers continue to be threatened by an ever-expanding litigation environment and have an increased awareness over regulatory issues they might encounter.Ã¢â‚¬ 

Three separate surveys follow class actions and similar filings as a way to benchmark D&O trends – Advisen, NERA Economic Consulting and Stanford Law School/Cornerstone Research. (We touched on NERA’s results a couple of months ago.) They all have their own methodologies, so while the numbers donÃ¢â‚¬â„¢t synch up, the overall trends do. They show:

Plaintiff attorneys also are aggressively pursuing M&A cases, recognizing that Ã¢â‚¬Å“companies often are willing to quickly settle suits that threaten to hold up a deal,Ã¢â‚¬  Advisen said in a separate analysis of the M&A phenomenon.

Stanford Law Professor Joseph Grundfest looks at Cornerstone’s M&A numbers and added : Ã¢â‚¬Å“Plaintiff lawyers are scrambling for new business as traditional fraud cases seem to be on the decline. There is little reason to believe that this trend will reverse or slow down; if anything, plaintiff lawyers may well bring an increasing percentage of these claims in federal court in an effort to control the litigation and to share in any fees that might result.Ã¢â‚¬ 

The studies also report that securities litigation has been rising outside the United States in recent years. That may help explain why, in TowersÃ¢â‚¬â„¢ survey, nearly half (47%) of the international companies surveyed purchased a local D&O policy in a foreign jurisdiction. Two years earlier, only 2% had.

The larger the company, the more likely they were to buy.