Our Communications department has received questions from Canadian news outlets on behalf of Canadian citizens who own homes in areas affected by either Hurricane Harvey or Irma. Here are some of their questions and the answers we found.  Of course, the answers below also apply to other non-citizens who own property in the U.S.

A:  It depends. To be eligible for assistance from FEMA, at least one person in the household must be a U.S. citizen, Qualified Alien or noncitizen national with a U.S. Social Security number.

A: Yes. Anyone who owns property in the U.S. can buy a FEMA NFIP policy as long as their property is in a participating NFIP community. They should be able to buy excess flood coverage if the event they want policy limits above a beyond what FEMA’s NFIP offers ($250,000 for dwelling protection, and $100,000 for the dwelling’s contents).

A: Yes, it appears. We found no restrictions on the citizenship of the buyer. To find out more about Florida Citizens’ eligibility requirements click here.

We’ve chronicled loss estimates from Harvey. Here we’ll do the same for Irma.

Estimates include losses to buildings, other insured structures, contents, business interruption and autos, but do not include crops or losses covered by the National Flood Insurance Program.

Hurricane Irma begins its assault, while Texas and Louisiana begin the long road to recovery from Hurricane Harvey.

No one, of course, knows exactly what damage Irma will unleash, but it is likely to be quite different from what Harvey wrought. That’s because no two storms are alike.

Business Insider touches on the differences:

While Harvey’s record rains drenched southeastern Texas and western Louisiana, flooding Houston in over 4 feet of rainfall, Irma’s winds — if they stay as strong as they were on Tuesday evening — could flatten buildings, trees, and power lines on the Caribbean islands it’s threatening to devour.

At its peak, Harvey was a Category 4 hurricane on the Saffir-Simpson scale, but its weakened winds downgraded it to a tropical storm the day after it made landfall. Irma, meanwhile, is a Category 5 monster that’s already one of the strongest Atlantic hurricanes ever recorded — and it’s still strengthening.

Meanwhile, Live Science laments the problems with shoehorning all the complexities of a hurricane into a single number, like Category 5.

As a Category 4 storm, Harvey’s winds meaning landfall blew between 130 and 156 mph. But catastrophe modeling firm RMS said the storm packed only one-fifth the total energy of Hurricane Ike, a Category 2 storm that struck the same area in 2008.

Harvey became an enormous flood because the storm lost almost all its forward momentum upon reaching land.

Meanwhile Irma is among the most powerful storms ever to cross the Atlantic, but doesn’t threaten a Harvey-like deluge. It is delivering, however, bark-shredding winds that will cause catastrophic damage.

Both storms, though, are tragedies.

If you are bracing yourself for Irma, FEMA has advice here. 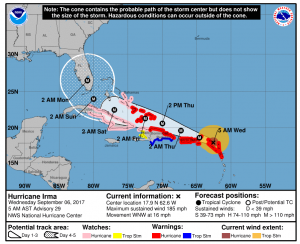 The most powerful Atlantic Ocean hurricane in recorded history made its first landfall in the islands of the northeast Caribbean early Wednesday, churning along a path pointing to Puerto Rico, the Dominican Republic, Haiti and Cuba before possibly heading for Florida over the weekend.

The eye of Hurricane Irma passed over Barbuda around 1:47 a.m., the National Weather Service said. Residents said over local radio that phone lines went down. Heavy rain and howling winds raked the neighboring island of Antigua, sending debris flying as people huddled in their homes or government shelters.

CNN notes that the eye of the storm was bigger than the island of Barbuda.

The forecast is for the storm to swing north toward Florida, as you can see in the National Hurricane Center cone illustration above. A South Florida strike is forecast four or five days from now.

FEMA – the Federal Emergency Management Agency – has information on how to prepare for a hurricane.

Sunday night, as Hurricane Irma toggles between Category 2 and Category 3, Weather Underground gives us the . . .

Bottom line: Irma is a growing threat to the Leeward Islands, the Greater Antilles, and the Eastern Bahamas. Irma is expected to be drawing closer to the East Coast as a powerful Category 4 hurricane this weekend, but it is still too soon to predict the timing and location of any potential landfall with confidence, and it is still possible Irma will move out to sea.

Do you have a hurricane plan?

This just came in an email blast from FEMA, along with an accompanying pdf:

FEMA encourages ALL individuals affected by Hurricane Harvey to register for disaster assistance—even if they have flood insurance.

At this time, FEMA is encouraging individuals to register through the website at: www.disasterassistance.gov. There is the ability to register by phone however; as expected there will be wait time when calling 1-800-631-6632 (FEMA).

At registration:
· At time of registration and inspection, applicants are required to inform FEMA of all insurance coverage that may be available to them to meet their disaster-caused needs. FEMA does not require denial of insurance coverage before people call 800-621-3362 to register for FEMA assistance.
· Applicants who only have homeowners insurance but have sustained flood damage are not required to submit insurance documentation to receive FEMA Rental Assistance or financial assistance for real or personal property disaster-caused damage.
· Applicants are not required to submit homeowners-insurance documents to FEMA before FEMA will consider their eligibility for financial assistance for any real property damage caused by flood.

The tragedy of Hurricane Harvey continues, but Hurricane Irma lurks.

As I write this (1 p.m. Saturday) Irma has sustained winds of 110 mph, which puts it at the top of Category 2 status. It could reach Cat 4 soon, according to the National Weather Service, and its path could take it to the East Coast by mid-week.

If you live along the East Coast – and with Harvey fresh in mind – it really, really makes sense to make sure Irma doesn’t surprise you.

FEMA gives a complete rundown of what to do before and after a storm here.

Insured loss for Texas and Louisiana is between $7.5 billon and $11.5 billion, according to their estimates. This excludes commercial, loss of business and other, broader economic losses, according to the CoreLogic press release.

An estimated 70 percent of flood damage from Hurricane Harvey is not covered by any insurance.

A hurricane creates another complication. Hurricanes often involve flooding, but flood losses are not covered by a standard homeowners policy. They are covered by a special insurance policy with the federal National Flood Insurance Program. Often insured loss estimates leave out losses from flood insurance.

Here is a rundown of loss estimates, both insured and uninsured. We’ve tried to specify whether flood is included, or if there is another important nuance to the estimate.

We will keep updating estimates as we receive them.

Insurance claims professionals often are the second people on the scene after a natural disaster, arriving right after the first responders. In fact, insurers are often considered the economic first responders – because it is insurance that fuels recovery.

After you call in your insurance claim, a claims adjuster will be assigned to you. This professional investigates and evaluates your loss and helps you get insurance funds to settle your claim. While some insurers may use a single adjuster, others may prefer to use certain specialists. That means you could have more than one claims adjuster assigned to assist with filing a claim after a disaster.

For example, you may have someone meet you at your property who is an expert in construction and structural damage. Another expert claims handler could be assigned to help itemize your home’s contents. If you have flood insurance, a flood claim specialist may be called in. And, if your vehicle was damaged by flooding, an auto damage specialist would be assigned.

In every instance, the goal is to pay your claim and provide the financial resources to rebuild. Understanding the insurance claims process will help to ensure that it is a smooth one.