Ongoing civil unrest and protests in Charlotte, North Carolina following the police shooting of Keith Scott are reported to have caused significant property damage to businesses in the central area of the city.

The NASCAR Hall of Fame was among other sites hit by vandals, with adjacent restaurants and hotels also damaged after officials declared a state of emergency for the city.

As clean-up gets underway it’s important to note that most commercial insurance policies generally include coverage for losses caused by riots. civil commotions and fires.

The definition of rioting covers looting by people who steal merchandise or other property from a premises. Vandalism is also covered.

According to The Charlotte Observer, a possible curfew for Thursday night is being discussed by city officials.

A “civil authority provision” in a business policy provides coverage for lost income and extra expenses in the event the police or fire department bars access to a specific area as a result of the danger caused by a riot or civil commotion.

In April 2015, looting and arson in Baltimore, Maryland, following the funeral for Freddie Gray, a 25-year-old who died after suffering a severe spinal cord injury while in police custody, resulted in estimated property damage of about $24 million, according to the I.I.I..

Five of the costliest civil disorders in the U.S. occurred in the 1960s. Here’s they are: 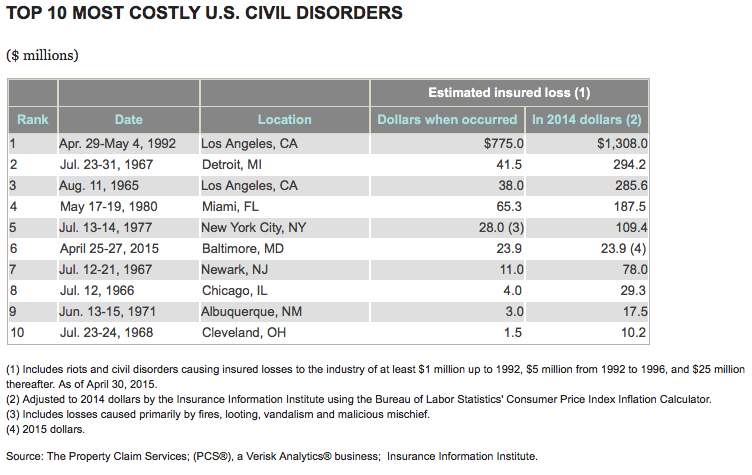