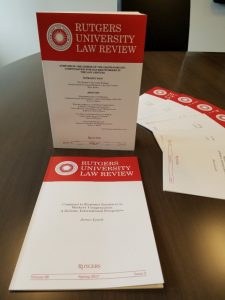 Commentary on workers compensation insurance by I.I.I Chief Actuary James Lynch is being published in the upcoming issue of the Rutgers University Law Review.

Lynch’s piece, “Comment to Economic Incentives in Workers’ Compensation: A Holistic International Perspective,” was written in response to an article by Stanford Professor Alison Morantz and others. The two spoke at a 2015 conference about the Grand Bargain in workers compensation.

Speakers discussed whether recent events were jeopardizing the so-called ‘Grand Bargain’ – workers forfeit their right to sue for on-the-job injuries in exchange for predictable benefits from a no-fault system. Professor Morantz’s article compared social safety net programs (including workers comp) worldwide and “discusses several mounting pressures that are jeopardizing the capacity of the U.S. workers’ compensation system to carry out its intended goals.”

In his response, Lynch noted that much of the current research in U.S. workers compensation “involves finding ways to reduce incentives that drive costs higher with no discernable benefit to the worker.” One example cited: When New York doctors book surgery for comp patients in New Jersey, they charge an average of $4,954, or 266 percent more than if the same surgery with the same surgeon took place in New York. (The I.I.I Blog featured this research two years ago.

Neither Morantz’s nor Lynch’s article was online as of February 16, but both should become available at the law review website soon.

One thought on “Commentary by I.I.I. chief actuary published in law review”