Cyberattacks are now the greatest risk to doing business in North America, according to the just-released World Economic Forum’s (WEF) Global Risks Report 2016.

In North America, which includes the United States and Canada, cyberattacks and asset bubbles were considered among the top risks of doing business in the region.

The WEF noted that in the United States, the top risk is cyberattack, followed by data fraud or theft (the latter ranks 7th in Canada, which is why it scores 50 percent in the table below).

The risks related to the internet and cyber dependency are considered to be of highest concern for doing business in the wake of recent important attacks on companies, the WEF observed. 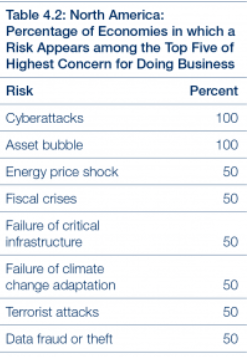 On a global scale, cyberattack is perceived as the risk of highest concern in eight economies: Estonia, Germany, Japan, Malaysia, the Netherlands, Singapore, Switzerland, and the United States.

Public sector bodies in at least two of these countries have recently been disrupted by cyberattacks: the US Office of Personnel Management and the Japanese Pension service, the WEF noted.

Attempts to detect and address attacks are made harder by their constantly evolving nature, as perpetrators quickly find new ways of executing them. Businesses trying to match this speed in their development of prevention and response methods are sometimes constrained by a poor understanding of the risk, a lack of technical talent, and inadequate security capabilities.”

Defining clear roles and responsibilities for cyber risk within corporations is crucial, the WEF noted.

Who in the corporation is the actual owner of the risk? While there are many “C” level owners (CISO, CFO, CEO, CRO, Risk Management), each of these owners has differing but related interests and unfortunately often does not integrate risk or effectively collaborate on its management.”

Outdated laws and regulations also inhibit the ability of governments to capture criminals, but also to expedite the often lengthy procedure of implementing legal and regulatory frameworks to reflect evolving realities.