State FarmÃ¢â‚¬â„¢s findings show that for the third consecutive year, the number of deer-vehicle collisions has dropped, and the downturn is accelerating.

Using its claims data, State Farm estimates that 1.09 million collisions between deer and vehicles occurred in the U.S. between July 1, 2010 and June 30, 2011. ThatÃ¢â‚¬â„¢s 9 percent less than three years ago and 7 percent fewer than a year ago.

However, the average property damage cost of these incidents was $3,171, up 2.2 percent from the year before.

For the fifth year in a row, West Virginia tops the list of states where an individual driver is most likely to run into a deer. State Farm calculates the chances of a West Virginia motorist striking a deer over the next 12 months at 1 in 53, an improvement over last yearÃ¢â‚¬â„¢s odds of 1 in 42.

Iowa remains second on the list (1 in 77), followed by South Dakota (1 in 81) which moves up one place to third, Pennsylvania (1 in 86) which jumps two places to fourth, Michigan (1 in 90) which drops from third to fifth.

November, the heart of deer migration and mating season, is the month during which deer-vehicle encounters are most likely, with more than 18 percent of such mishaps occurring in this month.

So why are deer-vehicle collisions declining?

While we canÃ¢â‚¬â„¢t put our finger directly on whatÃ¢â‚¬â„¢s causing a decline in deer-vehicle collisions, weÃ¢â‚¬â„¢d like to think media attention to our annual report on this subject has had at least a little bit to do with it.Ã¢â‚¬ 

Check out I.I.I. tips on how to avoid deer/car collisions.

Check outÃ‚  State Farm’sÃ‚  map to see if you live in a high risk state: 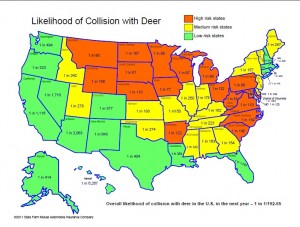