A study published online in the Bulletin of the Seismological Society of America says that sections of the San Andreas fault system–the Hayward, Rodgers Creek and Green Valley faults–are nearing or past their average earthquake recurrence intervals.

It says the faults ‘are locked and loaded’ and estimates a 70 percent chance that one of them will rupture within the next 30 years. This would trigger an earthquake of magnitude 6.7 or larger, the study’s authors say.

A second study by catastrophe modeler RMS says the next major quake could be financially devastating to the Bay Area economy in part because of low earthquake insurance penetration.

RMS warns that a worst-case 7.9 magnitude earthquake on the San Andreas fault could cause over $200 billion in commercial and residential property losses, yet only 10 percent of households currently have earthquake insurance.

The Bay Area has made significant progress in terms of infrastructure preparedness and retrofitting, but without significant earthquake insurance penetration to facilitate rebuilding, the recovery from a major earthquake will be considerably harder.”

Without insurance, homeowners may walk away after a quake if the residual value of their property is less than the outstanding value of their mortgage, RMS notes. Even those with insurance are likely to struggle to meet high deductibles, potentially leading to significant blight and disrepair in badly damaged neighborhoods.

Despite low earthquake insurance penetration, a magnitude 7.0 earthquake rupturing on the Hayward fault could produce $25 billion in insured loss across residential and commercial lines of business, RMS concludes. 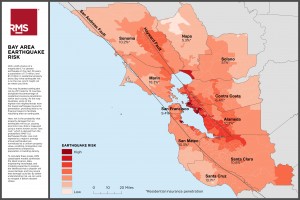 A glance at the economic context shows that since the 1989 Loma Prieta earthquake, population in the Bay Area has increased 25 percent, while the value of residential property has jumped by 50 percent, reaching $1.2 trillion.

The Bay Area is also the most productive economy in the U.S. with a gross domestic product of $535 billion, ranking 19th in the world compared to national economies, RMS says.

Check out I.I.I. facts and stats on earthquakes.