The United States and Japan will remain the largest insurance markets in 2020, while China will rise to third place, according to a study by Munich Re.

Munich ReÃ¢â‚¬â„¢s Insurance Market Outlook 2013 indicates that the global insurance market is set for strong growth in the years to come, with growth rates especially strong in emerging countries.

As a result the global rankings of the largest primary insurance markets will change over time.

While China was only in 15th place in 2000 in terms of total premium income, in 2010 it had already reached sixth place, and in 2020 is likely to be ranked as the third largest market.

Brazil and India will also be in the top 10 in 2020. However, Munich Re does not expect the dominant position of the U.S. market, followed by Japan, to have changed by the end of the decade. 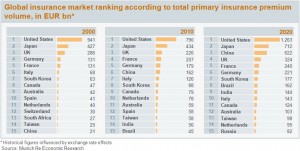 Munich Re estimates that until 2020 the property-casualty insurance market as a whole will grow by approximately 50 percentÃ‚  compared with 2012 to Ã¢”š ¬1.85tn ($2.38tn), and the life insurance market by almost two-thirds to Ã¢”š ¬3.1tn.

Growth in insurance and reinsurance in emerging countries will be significantly stronger than in industrialized countries.

Nevertheless, the mature markets in North America, western Europe and the industrialized countries of the Asia/Pacific region remain the dominating growth force. These markets will account for a 73 percent share of primary insurance premiums by 2020, around 10 percentage points lower than in 2012. The share generated by the emerging countries in Asia will move up from 8 percent to 16 percent.

Approximately half of all the additional premium earned between 2013 and 2020 will come from the USA, China and Japan. In this respect, saturated markets and emerging markets both represent great potential for growth in insurance and reinsurance alike.Ã¢â‚¬ 