Latest information from the National Weather Service (NWS) in Memphis, Tennessee indicates that the Mississippi River is expected to crest at around 48 feet tomorrow Ã¢â‚¬“ the second highest level on record at Memphis.

The long-standing Memphis record is 48.7 feet, a level reached during the great flood of 1937.

Heavy, extended rainfall and record snow melt have contributed to what is becoming a major flood event of America’s largest river.

You may remember in MarchÃ‚  our fellow blogger Jim Lynch reported on the NWS warningÃ‚  of the potential for widespread, record flooding this Spring.

The flood crest along the Mississippi is forecast to move slowly downstream towards New Orleans during the next three weeks.

The U.S. Army Corps of Engineers has already opened one spillway upstream from New Orleans to reduce the volume of water as it surges southward and today is opening a second: the Bonnet CarrÃƒ © Spillway. A third and final spillway could be opened later this week.

Check out Dr. Jeff MastersÃ¢â‚¬â„¢ Wunderblog for a timely and fact-filled update on this event.

From the insurance standpoint, while the optional comprehensive portion of an auto insurance policy includes coverage for flood damage, it is excluded under standard homeowners and renters insurance policies.

Flood coverage for homeowners and renters is available in the form of a separate policy from the federal governmentÃ¢â‚¬â„¢s National Flood Insurance Program (NFIP) and from a few private insurers.

Check out this Insurance Information Institute (I.I.I.) backgrounder on flood insurance to find more on how the NFIP works.

As of 9AM here is the NWS graphic of the Mississippi river stages and crests: 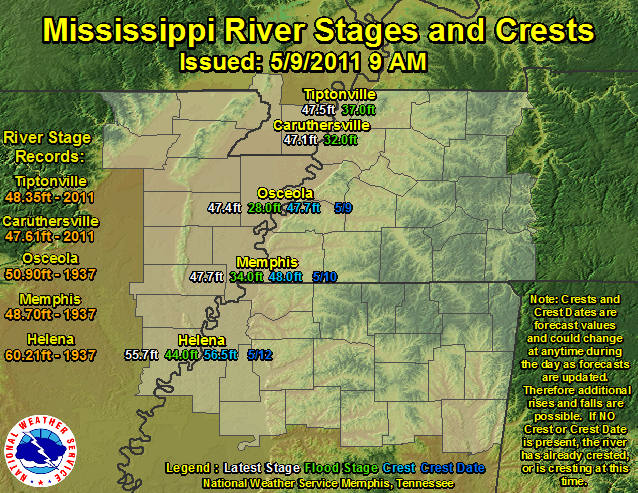