The cost of claims paid by homeowners insurers has been increasing at twice the rate of inflation, despite significant declines in recent years, according to the 2015 edition of a report from the Insurance Research Council (IRC).

Average homeowners claims payments per insured home have been increasing at an annualized rate of 5.0 percent since 1997, the IRC said, compared to the inflation average of approximately 2.4 percent. 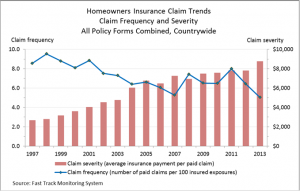 What’s behind the increased costs?

All of the increase in average costs per insured home was due to growth in average claim severity, which rose at an annualized rate of 7.8 percent over the 17-year period–more than triple the rate of inflation, the IRC said.

The rise in claim severity more than offset a 2.6 percent annualized decrease in claim frequency, the report found.

That said, claim frequency trends were found to be significantly more volatile than claim severity trends, especially for experience identified by insurance companies as related to catastrophe events.

In the words of Elizabeth Sprinkel, senior vice president of the IRC:

In addition, consumers will find it increasingly important to consider steps to control their personal exposure to risk and to mitigate the damages and costs associated with severe weather events.”

I.I.I. has useful facts and statistics on homeowners insurance here.

One thought on “Homeowners Claims: A Picture of Volatility”