Hurricane Matthew, a dangerous Category 3 storm, appears to have the cities along Florida’s east coast in its sights as it heads across the Bahamas today and tomorrow.

On its current track, Hurricane Matthew is expected to be very near the east coast of Florida by Thursday evening, according to the latest advisory from the National Hurricane Center (NHC).

Some slight restrengthening is possible in the next few days, the NHC said.

Whether or not Hurricane Matthew makes landfall in Florida, clearly the storm poses a serious threat to Florida, Georgia and the Carolinas, though much depends on the exact track it takes.

Note: the insured value of coastal properties in those four states (FL, GA, SC, NC) totaled $3.4 trillion in 2012, according to AIR Worldwide.

“The general model consensus suggests that Matthew will slide northward very near, if not scraping along, the Florida coastline as a strong hurricane, making at least tropical storm force winds, high surf, and heavy rain likely for most of the cities along Florida’s East Coast.”

The fact that Hurricane Matthew is moving slowly (currently at around 12 mph) means that the storm is likely to impact the southeast U.S. for a number of days.

With that in mind, here’s a quick review, courtesy of the Insurance Information Institute, of how insurance policies respond to hurricane-related damage caused by wind, rain and storm surge:

—Damage to cars from tropical storms or hurricanes is covered under the optional comprehensive portion of an auto insurance policy. This includes wind damage, flooding and even falling objects such as tree limbs.

CoreLogic analysis shows that just under 3.9 million homes located along the Atlantic coast of the United States are at risk of hurricane-driven storm surge, with an estimated total reconstruction cost value (RCV) of $953 billion.

The state of Florida, which has the longest coastal area, has the most homes at risk at 2.7 million, and an estimated RCV of $196.1 billion.

Here’s the visual of Hurricane Matthew’s track, via Weather Underground: 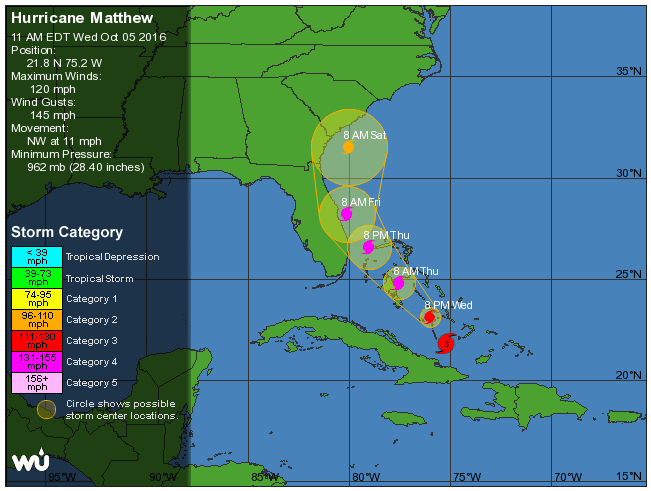 Leave a Reply to Greg at EK Cancel reply