State Insurance Commissioner Jim Donelon (pictured below) organized the conference to emphasize how the state’s property insurance market “is more competitive and more viable than it was the day before Hurricane Katrina.” The state sought private market solutions to keep the marketplace vibrant in the wake of more than $25 billion in insured losses. 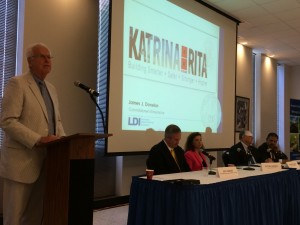 Louisiana adopted a statewide building code so structures would be better able to withstand a hurricane. It abolished its politically appointed Insurance Rating Commission, which made it easier for insurers to charge fair premiums. And the state carefully winnowed customers out of its insurer of last resort, Louisiana Citizens Property Insurance Corp. Citizens’ market share soared after the 2005 hurricane season, approaching 10 percent by 2008. By 2014, its market share had fallen to 1.8 percent.

I spoke on a panel about the state’s property insurance markets operate today. I tried to emphasize how Louisiana’s experience shows the importance of adequate insurance. We also talked about alternative capital and how it is shaping the pricing of catastrophe reinsurance, a topic I.I.I. has discussed here.

Over the next few weeks, you will be seeing a lot of media coverage of the 10th anniversary of Hurricane Katrina. Here are some notable links: