While the composite rate for U.S. commercial property and casualty insurance remains positive, at plus 1 percent in August, it is closing in on flat or no increases and rate reductions are coming, according to online insurance exchange MarketScout.

Insurers really don’t want to enter another era of rate declines; but in order to hold business, most of the market is being forced to moderate pricing. If this trend continues, we should see annual rate declines very soon.” 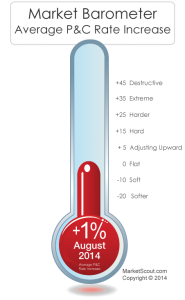 — Property rates were actually up slightly at plus 3 percent in August.

— Business interruption was down one percent to flat, as were fiduciary and crime.

— Business owners’ policies and commercial auto moderated from plus 3 percent to plus 2 percent.

— Umbrella liability coverage moderated from plus 2 percent to plus 1 percent.

— Workers compensation rates were up from plus 1 percent to plus 2 percent.

— Rates as measured by account size and industry classification remained the same as in July 2014.

Bear in mind that August is traditionally a slower month for insurance placements so the volume of premium measured is less than normal.

Still, the findings tie in with the latest quarterly Commercial P/C Market Index Survey from the Council of Insurance Agents & Brokers released in July. It found prices for commercial p/c insurance continued to slide in the second quarter of 2014. On average, prices for small, medium and large accounts eased by a modest -0.5 percent during the second quarter, compared with 1.5 percent in the first quarter.