Just in time for Valentine’s Day Jim Lynch brings us a heartfelt tale  of love and  insurance:

Last year I wrangled a review copy of Love Insurance, a century-old novel by Earl Derr Biggers, whose better known works created Charlie Chan in a spectacularly unsuccessful attempt to sweep away anti-Chinese stereotypes. The book was re-released by London’s Hesperus Press. 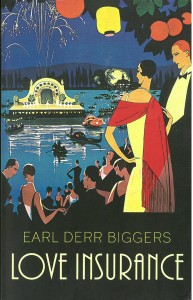 The story: A member of the British peerage buys a Lloyd’s policy that will pay him £75,000 if his impending marriage falls through. To protect his investment, the underwriter sends an earnest delegate to monitor the engagement. Earnest delegate falls in love with fiancÃ©e. They end up together despite several plot twists, most not memorable to me six weeks after finishing the book. So unfortunately I cannot recommend the work.

I do remember the insurance policy: £7,500 for a £75,000 limit. The cash-strapped lord can’t afford more cover — he’s marrying into an American fortune, a fact that addresses adverse selection.

Anyhow, as you can see above the policy is priced at 10 percent rate on line. Back then, the load for expenses and profit was a factor like 100/80ths or 100/75ths. Stripping that from the rate on line implies the underwriter and the lord implicitly agreed the probability the policy would pay was between 7.5 percent  and 8 percent.

These days wedding insurance covers calamities from the event, not of the heart, as the linked I.I.I. article and video explain.