If you’re reading about the rising number of measles cases in California, you may also be thinking about pandemic risk.

First, let’s look at the status of measles cases and outbreaks in the United States.

The CDC notes that from January 1 to January 28, 2015, 84 people from 14 states were reported to have measles. Most of these cases are part of a large, ongoing outbreak linked to Disneyland in California.

On Friday (January 30, 2015), the California Department of Public Health released figures showing there are now 91 confirmed cases in the state. Of those, 58 infections have been linked to visits to Disneyland or contact with a sick person who went there.

At least six other U.S. states — Utah, Washington, Colorado, Oregon, Nebraska and Arizona–as well as Mexico have also recorded measles cases connected to Disneyland, according to this AP report.

What about last year?

The U.S. experienced a record number of measles cases during 2014, with 644 cases from 27 states reported. Many of the cases in the U.S. in 2014 were associated with cases brought in from the Philippines, which experienced a large measles outbreak, according to the CDC. 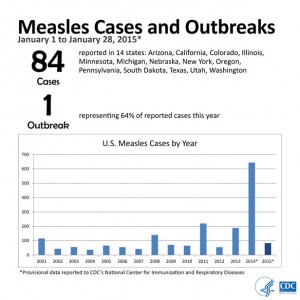 Measles, which can be prevented by vaccine, is one of the most contagious of all infectious diseases. The virus is transmitted by direct contact with infectious droplets or by airborne spread when an infected person breathes, coughs, or sneezes.

Approximately 9 out of 10 susceptible persons with close contact to a measles patient will develop measles, the CDC reports.

This is an important point. A study published by Risk Management Solutions (RMS) last year compared the low transmissibility of Ebola (Ebola can only be transmitted through direct contact with bodily fluids), with other infectious diseases such as measles.

RMS noted that each person infected with measles can generate on average more than 10 additional  cases in an unvaccinated environment.

What about mortality risk?

Measles is one of the leading causes of death among young children, the World Health Organization (WHO) says. In 2013, there were 145,700 measles deaths globally–about 400 deaths every day or 16 deaths every hour.

One or two out of every 1,000 children who become infected with measles will die from respiratory and neurologic complications, according to  the CDC.

One dose of the Measles, Mumps, Rubella (MMR) vaccine is approximately 93 percent effective at preventing measles, CDC notes, while two doses are 97 percent effective. Measles vaccination resulted in a 75 percent  drop in measles deaths between 2000 and 2013 worldwide, WHO reports.

The potentially devastating impact of the rapid and massive spread of infectious diseases was a risk underscored by respondents to the recently released World Economic Forum (WEF) Global Risks 2015 report.

This reflects the need for a higher level of preparedness for major pandemics at both the country and international levels, the WEF noted.

The I.I.I. has facts and statistics on mortality risks here.