The expected $2 billion minimum economic cost of the South Carolina and eastern U.S. floods in early October will place the event as one of the top 10 costliest non-tropical cyclone flood events in the country since 1980.

Aon Benfield’s latest Global Catastrophe Recap report, which evaluates the impact of natural disaster events occurring worldwide during October 2015, reveals that already public and private insurers have reported more than $400 million in payouts from the event.

The event caused considerable flood inundation damage to residential and commercial properties, vehicles, and infrastructure after more than two feet (610 millimeters) of rain fell from October 1 to 5.

Aon noted that the minimum $2 billion in total economic losses from the event includes infrastructure and $300 million in crop damage.

However, additional insured losses of at least $100 million are expected via the federal National Flood Insurance Program (NFIP) and the USDA RMA crop insurance program.

A recent  article  by Insurance Journal noted that the potential exposure home insurers in South Carolina face from the early October event is estimated at $18 billion. That’s according to figures by catastrophe modeling firm CoreLogic.

According to the Insurance Information Institute (I.I.I.), none of the 10 largest floods as ranked by NFIP payouts occurred in South Carolina (see below).

However, the state was affected by three of the most costly U.S. hurricanes: Hurricanes Charley and Frances in 2004 and Hurricane Hugo in 1989. 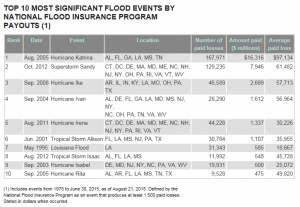