Reports of a Ã¢â‚¬Å“small tornadoÃ¢â‚¬  in New Jersey hit very close to home Monday morning as I was driving to an appointment when torrential rain and thunderstorms bore down.

The National Weather Service (NWS) has confirmed that the EF-0 tornado touched down in Union County, New Jersey, amid a band of thunderstorms that brought heavy rain and flooding to parts of the state yesterday.

The tornado touched down in Berkeley Heights and for eight minutes cut a path nearly 50 yards wide and 4.8 miles long northeast through New Providence and Summit.

Winds reached an estimated 85 mph and extensive tree damage was observed along the tornado path, the NWS said.

The NJ Star Ledger reports that New Jersey has experienced at least one tornado in each of the last five years, according to records from the National Oceanic and Atmospheric Administration. All of them were listed as EF-0, the lowest designation.

HereÃ¢â‚¬â„¢s a visual of the tornadoÃ¢â‚¬â„¢s path, courtesy of NJ.com and the NWS: 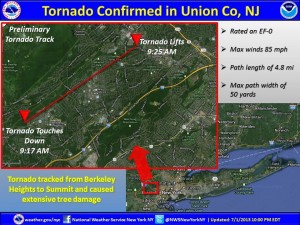 An EF-1 tornado is also confirmed to have touched down in Connecticut yesterday, causing property damage.

Check out I.I.I. facts and statistics on tornadoes and thunderstorms.