With just over a week to go until the start of the 2014 Atlantic hurricane season, NOAAÃ¢â‚¬â„¢s outlookÃ‚  is hot off the press and garnering a lot of attention.

Ã¢–  These numbers are near or below the seasonal averages of 12 named storms, six hurricanes and three major hurricanes, based on the average from 1981 to 2010. 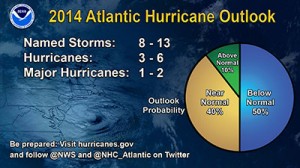 What are the reasons behind NOAAÃ¢â‚¬â„¢s predictions for a near-normal or below-normal season?

A key driver of this yearÃ¢â‚¬â„¢s outlook is the anticipated development of El NiÃƒ ±o this summer that is expected to cause stronger wind shear which reduces the number and intensity of tropical storms and hurricanes.

Despite the prognosis for a below-normal or near-normal season, itÃ¢â‚¬â„¢s important that coastal residents donÃ¢â‚¬â„¢t underestimate the hurricane threat. As Dr. Kathryn Sullivan, NOAA administrator says:

Even though we expect El NiÃƒ ±o to suppress the number of storms this season, itÃ¢â‚¬â„¢s important to remember it takes only one land falling storm to cause a disaster.Ã¢â‚¬ 

Note: NOAAÃ¢â‚¬â„¢s seasonal hurricane outlook is not a hurricane landfall forecast and does not predict how many storms will hit land or where a storm will strike.

For a round-up of the latest predictions from the major hurricane forecasters check out this post at Dr. Jeff MastersÃ¢â‚¬â„¢ Wunderblog.

Check out I.I.I. facts and statistics on hurricanes here.