Those of us in the Northeast still thawing out from the last two winters will be relieved to hear that this year’s winter is likely to bring warmer and wetter conditions thanks to El NiÃ±o.

NOAA’s just-released 2015 U.S. Winter Outlook (December through February) calls for cooler and wetter weather in the South, and above-average temperatures in the West and across most of the Northern tier states. 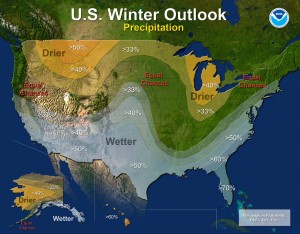 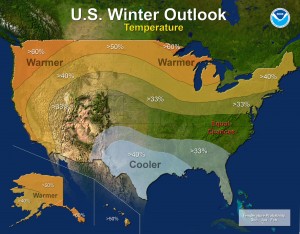 That’s not to say there won’t be snow.

NOAA says this year’s El NiÃ±o, among the strongest on record, is expected to influence weather and climate patterns this winter by impacting the position of the Pacific jet stream.

A strong El NiÃ±o is in place and should exert a strong influence over our weather this winter. While temperature and precipitation impacts associated with El NiÃ±o are favored, El NiÃ±o is not the only player. Cold-air outbreaks and snow storms will likely occur at times this winter. However, the frequency, number and intensity of these events cannot be predicted on a seasonal timescale.”

Winter storms are historically very expensive for insurers, and the third-largest cause of catastrophe losses, behind hurricanes and tornadoes. Check out the I.I.I.’s insurance-related facts and statistics on winter storms here.