Even though the first day of winter is still two months away, itÃ¢â‚¬â„¢s not too soon to prepare for the colder weather, at leastÃ‚  according toÃ‚  the latest winter forecasts and outlooks.

I.I.I. facts and stats on winter storms tell us that melting snow can inflict significant damage to property, and winter storms are the third-largest cause of catastrophe losses.

The Southern Plains should prepare for continued drier and warmer than average weather, while the Pacific Northwest is likely to be colder and wetter than average from December through February.

For the second winter in a row, La NiÃƒ ±a will influence weather patterns across the country, but as usual, itÃ¢â‚¬â„¢s not the only climate factor at play. The Ã¢â‚¬Ëœwild cardÃ¢â‚¬â„¢ is the lesser-known and less predictable Arctic Oscillation that could produce dramatic short-term swings in temperatures this winter.Ã¢â‚¬ 

For those of us living in the Northeast and Mid-Atlantic, NOAA gives us equal chances for above-, near-, or below-normal temperatures and precipitation.

Winter weather for these regions is often driven not by La NiÃƒ ±a but by the Arctic Oscillation. If enough cold air and moisture are in place, areas north of the Ohio Valley and into the Northeast could see above-average snow.Ã¢â‚¬ 

Check out Dr. Jeff MastersÃ¢â‚¬â„¢ Wunderblog for his take on the NOAA outlook.

Meanwhile, the Accuweather.com long range forecasting team is predicting another cold and snowy winter for a large part of the country, due mainly to La NiÃƒ ±a.

According to Paul Pastelok, expert long-range meteorologist and leader of the Accuweather.com long-range forecasting team, the North Central U.S. will bear the brunt of the 2011-2012 winter season.

The way the jet stream is expected to be positioned during this winterÃ¢â‚¬â„¢s La NiÃƒ ±a will tend to drive storms through the Midwest and Great Lakes. Last year, the jet stream steered storms farther east along the Northeast coast, hammering the Interstate 95 corridor.

Therefore, instead of New York City enduring the worst of winter this year, it will likely be Chicago.”

HereÃ¢â‚¬â„¢s the NOAA graphic of what to expect this winter season: 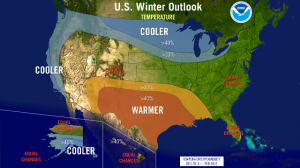