Who knew it would be a weekend for breakingÃ‚  records? An unprecedented earlyÃ‚  season snowstormÃ‚  slammed intoÃ‚  the Northeast U.S.Ã‚  eclipsing records for October snowfall and leaving at leastÃ‚  11 dead and more than two million without power.

Over at Wunderblog, weather historian Christopher Burt tells us:

Not since the infamous snow hurricane of 1804 have such prodigious amounts of snow been recorded in New England and, to a lesser extent, in the mid-Atlantic states. In fact, the snowfall, in most cases, has exceeded that of even the great October snow of 1804.”

Virtually every site north of Maryland to Maine, with the exception of coastal areas, recorded their greatest October snowfall on record.”

The latest storm summary from the National Weather Service has snowfall totals by state.

A combination of wet, heavy snow falling on trees that had yet to lose their leaves and were already weakened by Hurricane Irene, made for downed trees, branches and power lines, leaving many roads impassable and causing widespread power outages.

As we previously reported in the wake of Hurricane Irene, if a tree hitsÃ‚  your home or other insured structure, standard homeowners policies provide coverage for the damage the tree does to the structure and the contents in it.

It does not matter whether or not you own the tree. If it lands on your home, you should file a claim with your insurance company, the I.I.I. says.

If a tree hits an insured structure, such as your house or garage, there is also coverage for the cost of removing the tree, generally up to about $500 to $1,000, depending on the insurer and the type of policy purchased.

Winter storms are historically very expensive and are the third-largest cause of catastrophe losses, behind only hurricanes and tornadoes. From 1991 to 2010, winter storms resulted in about $26 billion in insured losses, according to ISO.

An October snowstorm might be rare, but it’s a reminder to us all that winter is just around the corner. Now is the time to winter-proof your home, according to the I.I.I.

Check out I.I.I. facts and stats on winter storms. 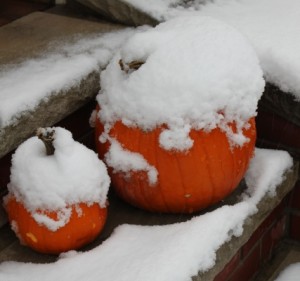 One thought on “October Snowstorm”