If you were flying United Airlines Sunday night, chances are you may have been delayed.

A computer outage grounded all of United’s domestic flights for more than two hours, according to this NBC report, though the glitch affected only aircraft on the ground and did not impact international flights.

The ground stop was issued after the Aircraft Communications Addressing and Reporting System, or ACARS, had issues with low bandwidth, NBC said.

This is not the first time that a computer glitch or system outage has affected United’s operations, or indeed those of other airlines.

Allianz warns that in today’s interconnected industrial world non-physical or non-damage causes of business interruption (BI) are becoming a much bigger issue.

Physical perils like fire and explosion and natural catastrophes are still the top causes of BI that businesses fear most, but preparing for non-damage perils is becoming increasingly critical.

This shift in BI risk means that intangible hazards, such as a cyber incident or interdependencies from global networks, can cause large revenue losses for companies without inflicting property damage. 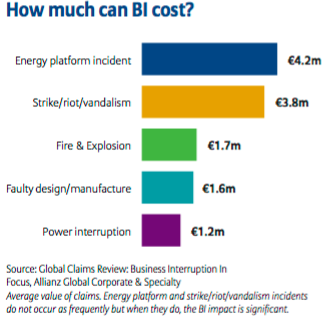 With this ever-expanding range of BI risks, it’s good to know insurers have you covered.