Nearly 6.9 million homes along the Gulf and Atlantic coasts have the potential for storm surge damage with a total estimated reconstruction cost value (RCV) of more than $1.5 trillion.

But it’s the location of future storms that will be integral to understanding the potential for catastrophic damage, according to CoreLogic’s 2017 storm surge analysis.

That’s because some 67.3 percent of the 6.9 million at-risk homes and 68.6 percent of the more than $1.5 trillion total RCV is located within 15 major metropolitan areas.

“A low intensity storm in a population dense, residential urban area has the ability to do significantly more damage than a higher intensity hurricane along a sparsely inhabited coastline.” 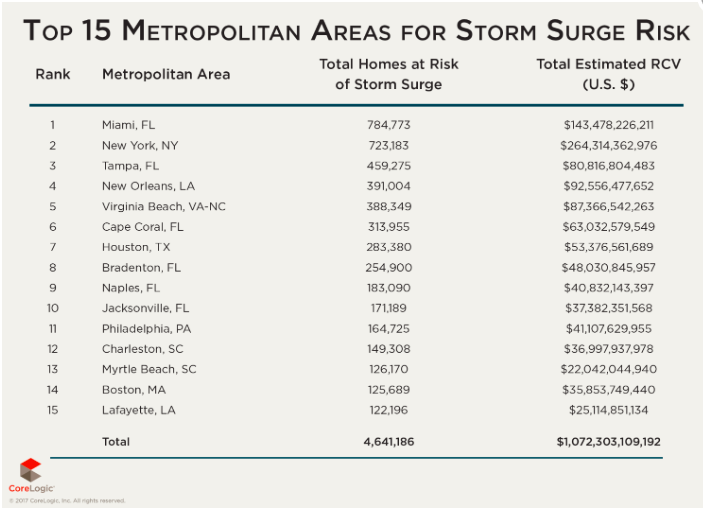 The metro area that includes Miami, Fort Lauderdale and West Palm Beach continues to have the greatest number of at-risk homes (784,000) and an RCV of $143 billion.

On the other hand, the New York metro area has slightly fewer homes at risk (723,000), but a much higher RCV of $264 billion due to high construction costs and home values in this area.

CoreLogic’s analysis also shows local areas along the coasts are susceptible to potential damage that could exceed $1 billion for a single event.

Storm surge and other flooding is on the minds of many in 2017 as Congress considers reauthorization of the National Flood Insurance Program (NFIP), CoreLogic says.