More than 6.6 million homes on the Atlantic and Gulf coasts are at risk of hurricane-driven storm surge with a total reconstruction cost value (RCV) of nearly $1.5 trillion.

Which states have the highest total number of properties at risk?

CoreLogic makes the point that even though Louisiana has the second highest number of homes at risk to storm surge in 2015, only one-quarter are in the extreme or very high storm surge category, due in large part to the upgrade and expansion of levees in the state in the 10 years since Hurricane Katrina.

The number of hurricanes each year is less important than the location of where the next hurricane will come ashore. It only takes one hurricane that pushes storm surge into a major metropolitan area for the damage to tally in the billions of dollars. With new home construction, and any amount of sea-level rise, the number of homes at risk of storm surge damage will continue to increase.” 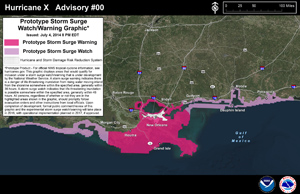 Storm surge is often the greatest threat to life and property in the event of a hurricane. While most coastal residents can remain in their homes and stay safe from a storm’s winds, evacuations are generally needed to keep people safe from storm surge, the NHC says.

It’s important to note that many properties located outside designated FEMA flood zones are still at risk for storm surge damage.

As CoreLogic reminds us, homeowners who live outside the FEMA flood zones frequently do not carry flood insurance, given that there is no mandate to do so, and therefore may not be aware of the potential risk storm surge poses to their properties.

Data in the full CoreLogic report can be found here.