While the dangers of texting and driving get a lot of headlines, you might be surprised at the findings of a new study by Erie Insurance that show daydreaming behind the wheel is even more dangerous.

ErieÃ¢â‚¬â„¢s analysis found that 62 percent of distracted drivers involved in fatal car crashes were described by police as daydreaming or Ã¢â‚¬Å“lost in thoughtÃ¢â‚¬ .

The police report data analyzed by Erie in the Fatality Analysis Reporting System (FARS) reveal that of the more than 65,000 people killed in car crashes over the past two years, one in 10 were in crashes where at least one of the drivers was distracted.

Erie didÃ‚  point outÃ‚  that because FARS data on distraction is based largely on police officers’ judgment at the time of the crash, and because some people may be reluctant to admit they were distracted when being interviewed by police after a fatal car crash, the numbers are difficult to verify and may, in fact, under-represent the seriousness and prevalence of driving distractions. 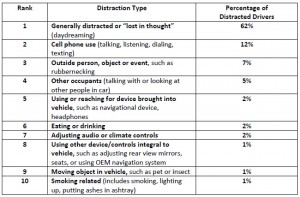 One thought on “Study: Majority of Distracted Drivers Lost in Thought”