Total economic losses from natural catastrophes and man-made disasters amounted to $140 billion in 2013,Ã‚  of which almost one thirdÃ‚  Ã¢â‚¬“Ã‚  around $45 billion Ã¢â‚¬“ were insured.

This means that in 2013 the global protection gap (the level of uninsured losses) was $95 billion.

Economic development, population growth, urbanization and a higher concentration of assets in exposed areas are increasing the economic cost of natural disasters. In addition, climate change is expected to increase weather-related losses in the future. All of the above, if not accompanied by a commensurate increase in insurance penetration, results in a widening protection gap.Ã¢â‚¬ 

ThatÃ¢â‚¬â„¢s not to say that there hasnÃ¢â‚¬â„¢t been any progress over the yearsÃ‚  in the area of risk prevention and mitigation measures.

Swiss Re makes the point that a very effective pre-designed evacuation drive saved thousands of lives when Cyclone Phailin made landfall in Odisha, India in October 2013, with winds up to 260km per hour.

However, the cyclone destroyed around 100,000 homes and more than 1.3 million hectares of cropland.

The total economic loss of Cyclone Phailin is estimated to be $4.5 billion, with just a tiny portion covered by insurance. The insurance industry can play a much larger role in helping societies deal with the fallout of disaster events, such as this and Typhoon Haiyan.Ã¢â‚¬ 

Meanwhile, a post at Artemis blogÃ‚  suggests that sustaining local markets is the key to increasing insurance penetration and ultimately narrowing the gap between economic and insured losses:

In order to narrow this gap reinsurers and insurers need to work together with development organisations and the capital markets to create risk transfer facilities that truly meet the goal of growing insurance penetration. Sustaining local markets is key here. Initiatives which seek to create new capacity for a single, often reinsurer, backer just donÃ¢â‚¬â„¢t seem to be having the desired effect so far and at the moment seem less likely to be sustainable over the longer-term.Ã¢â‚¬ 

HereÃ¢â‚¬â„¢s the Swiss Re chart showing the difference between total losses and insured losses from 1970 to 2013, highlighting the widening protection gap over the last 40 years: 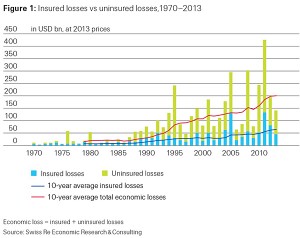 Check out our prior post on the widening gap between economic and insured cat losses here.