Another global ransomware attack, dubbed Petya, has disrupted operations at major firms across Europe and the United States.

Overall, cyber insurance for the majority of companies was profitable and the direct loss ratio decreased by 4.5 percentage points to 46.9 percent in 2016, from 51.4 percent in 2015.

Ransomware attacks are part of the reason for the decline in the loss ratio, A.M. Best explains:

“The decline in direct loss ratio for 2016 is partially attributed to the majority of reported cyber-attacks being related to ransomware heists. In almost all ransomware cases, the losses were well below the deductible and a simple backup recovery resolved and remedied any negative long-term effect of the attacks.”

Read our earlier post on insurance for ransomware attacks.

Transportation-related incidents were the leading cause of workplace fatalities in 2015—and by a long way—according to data just-released by the Bureau of Labor Statistics (BLS).

Of the total 4,836 workplace fatalities recorded in 2015, transportation-related incidents accounted for 2,054, or 42 percent.

The next closest major cause of workplace fatalities was falls, slips, and trips at 800, or 17 percent.

A key takeaway from the BLS figures: some 745 drivers of heavy and tractor-trailer trucks died because of injuries at work last year, more than any other major civilian occupation. The majority of these fatalities (84 percent) were caused by transportation incidents.

What are some of the factors in large truck crashes?

Truck braking capability for one. The Insurance Institute for Highway Safety (IIHS) reports that loaded tractor-trailers take 20-40 percent farther than cars to stop, and the discrepancy is greater on wet and slippery roads or with poorly maintained brakes.

Truck driver fatigue is another known crash risk. Federal regulations allow drivers of large trucks to drive up to 11 hours at a stretch, and up to 77 hours over a seven-day period.

Distracted driving is another key factor impacting the number of accidents.

As for insurers, a recent report by ratings agency A.M. Best noted that commercial auto insurance results continue to underperform the results of the overall property/casualty commercial lines market, due to escalating claim frequency and severity.

With more vehicles on the road, cumulative miles driven increasing, and gas prices at reduced levels, making a profit writing commercial auto insurance is a challenge few insurers have been able to meet, A.M. Best said.

It pointed to the considerable perils associated with larger vehicles, including trucks and buses, noting:

“The increased number of miles traveled over the last three or four years also factors into the rise in the fatalities associated with accidents involving larger vehicles that often produce losses exceeding $100,000 in total claim cost.”

Despite the myriad challenges, leading writers of commercial auto insurance have a track record of profitable operations, according to A.M. Best.

The Compliance, Safety, and Accountability (CSA) program implemented in 2010 by the Federal Motor Carrier Safety Administration, together with state partners and the trucking industry expanded safety reporting and enforcement measures for large trucks and buses.

Check out the Insurance Information Institute facts and statistics on workplace safety.

Hail claims are making headlines following multiple springtime hailstorms in Texas, including one in the San Antonio region that is expected to be the largest hailstorm in Texas history.

Which insurers will be most affected?

A.M. Best explains that for property insurers, in particular in property lines of business, losses are expected to stem from broken windows and roof damage. This will have an impact on underwriting performance and overall earnings.

Companies with a heavy concentration of automobile physical damage will also have significant losses.

However, for property insurers the increased use of actual cash value (ACV) for roof repairs, increased deductibles, and improved risk management strategies will help limit the amount of the ultimate claim payment, A.M. Best explains.

The impact on most auto physical damage insurers is also expected to be mitigated given the generally large economies of scale of major writers in the market, A.M. Best adds. 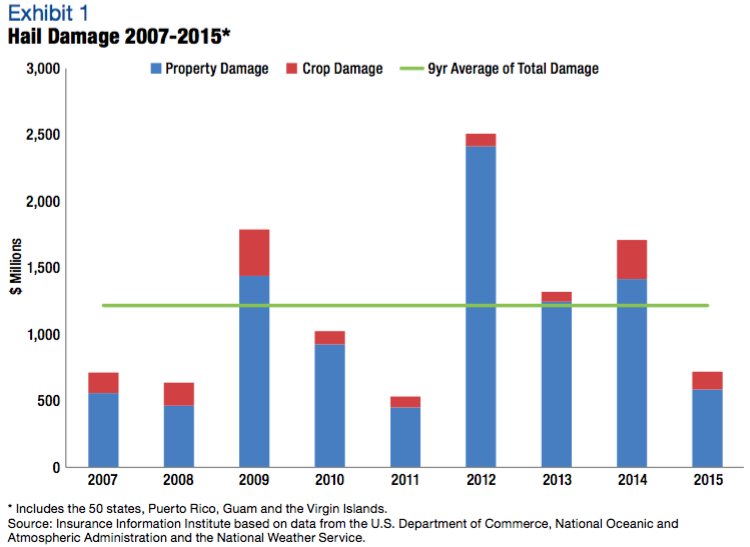 So, while the Texas hailstorm damage is poised to exceed the nine-year average of $1.2 billion for the United States, most insurers are well-capitalized and able to handle these severe weather events.

“The volatile weather is a harsh reminder of the damages a property and casualty writer can be exposed to and the need for companies to continue to practice prudent and evolving risk management.”

Check out this review of research and testing related to hail damage by the Insurance Institute for Business & Home Safety.

The Insurance Information Institute also has some handy statistics on hail here.