Among the many things we’ve missed since the start of the pandemic, travel has been one of the most notable. Whether for business, to visit distant family members, or just get away from our now-too-familiar surroundings, many of us have been keenly anticipating a return to air travel.

Flying is among the safest activities people can engage in (see infographic). But new concerns are being raised about risks emerging in a post-COVID-19 world.

The industry is slowly rebounding, and AGCS notes that the airline teams have stepped up to ensure that air travel remained safe, despite layoffs, financial struggles, and the pressures attending an overnight shift to remote working.

“But as more aircraft return to the skies,” the report says, “there has been much discussion about the hazards that may arise from such an unprecedented period, as well as some of the changes the sector will see.”

Earlier this year it was reported that dozens of pilots had notified the Aviation Safety Reporting System about making mistakes after climbing back into the cockpit. Operated by NASA, the Federal Aviation Administration (FAA) watchdog system enables pilots and crew members to anonymously report mechanical glitches and human errors.

“Many of the pilots cited ‘rustiness’ as a reason for the incidents after returning to the skies following months of lockdown,” AGCS reports. “While there have been no reported incidents of out‑of‑practice pilots causing accidents injuring passengers, mistakes reported included: forgetting to disengage the parking brake on takeoff, taking three attempts to land the plane on a windy day, choosing the wrong runway, and forgetting to turn on the anti‑icing mechanism that prevents the altitude and airspeed sensors from freezing.”

At the peak of the first wave of the crisis, airlines parked around two thirds of the total global fleet. More than a year later, many are still mothballed.

“This unprecedented situation has resulted in a host of new challenges,” AGCS writes. “Loss exposures do not just disappear when airplanes are parked.”

Rather, the risks and their costs change. AGCS cites fears of damage among grounded aircraft during thunderstorms in Texas that pelted the region with golf ball‑sized hail.

Aircraft are large and tricky to maneuver on the ground, and ground incidents can result in costly claims. When operators transferred fleets from the runways to storage facilities at the start of the pandemic there were a number of collisions. It would not be surprising, therefore, to see more such incidents as planes are moved in preparation for reuse.

The European Union Aviation Safety Agency has reported  “an alarming trend…of unreliable speed and altitude indications” related to accumulations of foreign objects, such as insect nests in areas of aircraft that provide flight-critical air data information.

“This has led to a number of rejected take-off and in-flight turn back events,” the agency reports.

On the other hand, as many airlines have retired larger aircraft earlier than planned due to COVID-19, there will be many newer planes on the runways and in the air, which presents its own challenges from an insurance coverage perspective. As we’ve written previously, more modern planes are more expensive to repair or replace when there is an incident, leading to more expensive claims.

Air rage on the rise

In May 2021, an attendant on a Southwest Airlines flight attendant had two teeth knocked out after an altercation with a passenger over wearing a mask – the latest in a spate of highly publicized incidents that moved the FAA to issue a warning about a spike in unruly or dangerous behavior. More recently, an American Airlines flight to the Bahamas was canceled when some among a group of high school students refused to wear masks.

In a typical year in the United States, there tend to be no more than 150 reports of serious onboard disruption, the AGCS report says – but by June 2021 that number had already reached about 3,000, including about 2,300 involving passengers who refused to comply with the federal mandate to wear a mask while traveling.

The aviation industry has seen few claims directly related to the pandemic to date, AGCS says, also noting a decline in slip-and-fall and lost-baggage claims at airports because of the reduced number of passengers during the pandemic. Such claims are expected to return to more typical levels as people resume traveling, and insurers will need to be mindful of new hazards that could affect claims experience.

Flying has never been safer.

You’re more likely to die from being attacked by a dog than in an airline accident (see chart).

And yet, according to a recent Allianz Global Corporate & Specialty (AGCS) report, the aviation sector’s insurance claims continue to grow in number and size.

The report – Aviation Risk 2020 – says 2017 was the first in at least 60 years of aviation in which there were no fatalities on a commercial airline. The year 2018, in which 15 fatal accidents occurred, ranks as the third safest year ever. 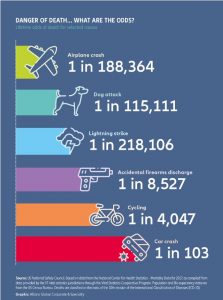 Some of the reasons for the increased claims are good ones: Safer aircraft cost more to repair and replace when there are problems.

The report analyzed 50,000 aviation claims from 2013 to 2018, worth $16.3 billion, and found “collision/crash incidents” accounted for 57 percent, or $9.3 billion. Now, this may sound bad, but the category includes things like hard landings, bird strikes, and “runway incidents.”

The AGCS analysis showed 470 runway incidents during the five-year period accounted for $883 million of damages.

Engine costs more than the plane

Today’s aircraft contain far more sophisticated electronics and materials than those flying in the 1960s. When they bump into each other or come down too hard, they cost more to repair.

When entire fleets have to be grounded – the report cites the 2013 grounding of the Boeing Dreamliner for lithium-ion battery problems and the more recent fatal crashes involving the Boeing 737 Max – costs can really soar. Boeing reportedly has set aside about $5 billion to cover costs related to the global grounding of the 737 Max.

Even after a fix is found, the task of retrofitting a fleet takes considerable time – and, in the aviation industry, time truly is money.

Compounding the claims associated with the costs of safer flight, the report says, liability awards have risen dramatically.

“With fewer major airline losses,” Watkins said, “attorneys are fighting over a much smaller pool and are putting more resources into fewer claims, pushing more aggressively for higher awards.”

Today’s aircraft carry hundreds of passengers at a time. With liability awards per passenger in the millions, a major aviation loss could easily result in a liability loss of $1 billion or more.