Dr. Robert Hartwig, an economist and president of the Insurance Information Institute (I.I.I.) for almost a decade is about to head south to join the faculty of the University of South Carolina’s Darla Moore School of Business. We caught up with him in his final days at the I.I.I. to ask him about his time in office, some of his most memorable moments and his plans for the future.

What accomplishment are you most proud of during your time as I.I.I. president?

Bob Hartwig: Over the past 10 years we’ve built an extraordinary brand around the Insurance Information Institute name.  The I.I.I. is the trusted source for insurance information, analysis and expertise.  The organization’s credibility is its currency among its many stakeholders including not only consumers, insurers and media but also legislators, regulators, academics and more.  I’m also very proud of the way that we’ve been able to use cutting edge technology to further our mission of sharing with the world how this vital industry works and the critical role it plays in the global economy.

What was your most challenging day in office?

BH: 9/11.  No question about it.  The I.I.I.’s offices in lower Manhattan were only a few blocks from the World Trade Center site.  We watched real time from our 24th floor office at 110 William Street as the towers fell.  Our building was hit by flying debris and enveloped in smoke.  As the horror of that day was unfolding before our eyes, we were at the same time working to make sure that media and others understood that insurers would be standing by their commitments and would work tirelessly to help the tens of thousands of impacted policyholders, the city of New York and the United States as a whole get back on their feet.

You’ve made hundreds of TV appearances over the years representing the industry. Any memorable moments you can share with us?

BH: There are so many, but once again I go back to 9/11.  One or two days after the event I was invited to appear on the set of 60 Minutes.  I had appeared in the press calling for a Marshall Plan for Manhattan and once again was there to assure a nervous country that insurers were committed to helping rebuild.

You’ve rubbed shoulders with more than a few famous people on the insurance speaking circuit. Who were you most excited to meet and why?

BH: It’s not always the most famous person who delivers the best speech.  I had the chance to meet Bill Clinton, who’s quite a compelling speaker.  Recently, I met Arnold Schwarzenegger—who appeared at a fundraising event for insurance education in his capacity as a former governor of California.  I thought he had a particularly inspiring story that would appeal to many young people.  Perhaps the smartest person I ever met and a personal hero to me was John Nash, recipient of the Nobel Prize in Economics in 1994 and depicted in the movie “A Beautiful Mind.”  I adapted some of the work he had done in the field of game theory in my PhD dissertation.  I met him in 2013 at the age of 84, two years before he and his wife died in a tragic car accident. 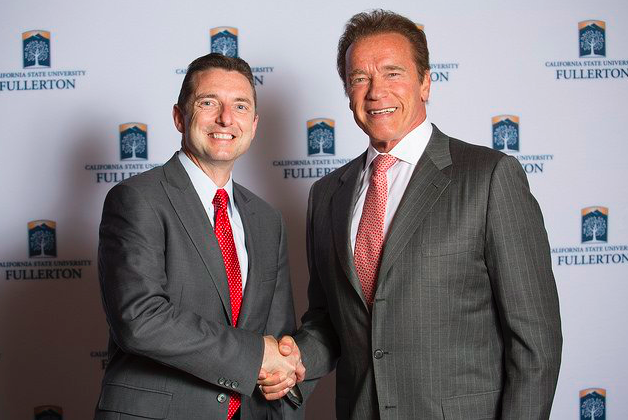 When you’re not in the classroom cultivating the next generation of insurance minds, where can we find you?

I’m sure I speak on behalf of many of our readers in thanking Bob for his leadership and wishing him all the best in the next chapter!