Once again food safety is in the news. This time itÃ¢â‚¬â„¢s cantaloupe.

The current outbreak of listeria infection linked to cantaloupes grown at Jensen Farms in Colorado, so far has caused at least 13 deaths and left 72 people ill.

According to reports, this makes it the deadliest foodborne outbreak in the United States in more than a decade. AndÃ‚  the number of illnesses and deaths are expected to rise, officials say.

It comes just months after a deadly E. coli outbreak in Europe.

The Food and Drug Administration (FDA) earlier issued a press release announcing that Jensen Farms issued a voluntary recall of its Rocky Ford-brand cantaloupes after being linked to a multi-state outbreak of listeriosis.

According to Centers for Disease Control and Prevention (CDC) estimates, each year roughly one in six Americans (or 48 million people) gets sick, 128,000 are hospitalized, and 3,000 die of foodborne diseases.

CDC also notes that some 3 or 4 outbreaks of listeria-associated foodborne illness are diagnosed each year in the U.S. The foods that typically cause these outbreaks have been deli meats, hot dogs, and Mexican-style soft cheeses made with unpasteurized milk.

Listeria, along with other pathogens such as salmonella, toxoplasma, and norovirus are the leading cause of foodborne deaths, according to CDC statistics (see chart via CDC website below). 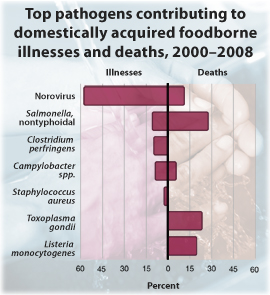 Meanwhile, check out this Q+AÃ‚  at Businessweek about listeria in fruit.

A report from Aon last year noted that the increasing frequency and severity of food contamination incidents is prompting greater awareness among food system, agribusiness and beverage companies to insure against such events.