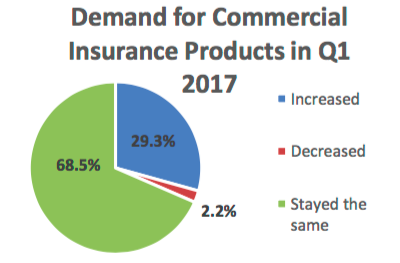 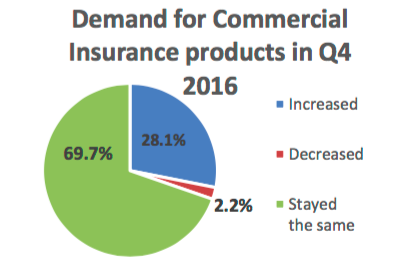 Online insurance exchange MarketScout reported that the composite rate for p/c  business placed in the United States declined by 4 percent in January 2016.

Richard Kerr, CEO of MarketScout, noted that commercial property rates dropped from minus 2 percent in December 2015 to minus 5 percent in January 2016.

By account size, large and jumbo accounts (over $250,001) were assessed rates slightly higher in January 2016 than in the prior month–bucking the usual trend, while rates for small and medium sized accounts (all under $250,000) were more competitive.

All size accounts experienced decreases in the fourth quarter of 2015, consistent with the downward trend seen in the prior three quarters. Large accounts saw the biggest decrease at 3.7 percent, followed by medium-sized accounts at 3 percent, and small accounts at 1.5 percent, The Council said.

By line, the largest decreases were seen in commercial property, down 3.5 percent, and general liability, down 3.4 percent. Umbrella policy rates declined an average of 2.8 percent while workers compensation rates were down an average of 2.6 percent.

Ken A. Crerar, president/CEO of The Council noted:

This soft market presents both challenges and opportunities for brokers. Lower rates meant less revenue but as the economy improved, policyholders were seeking increased limits and additional lines of coverage. This gave our members a chance to be creative and provide added value to their clients beyond just negotiating lower rates.”

The Council will continue to monitor how trends and advancements like industry consolidation, the burgeoning cyber insurance market and the use of technology in modeling and underwriting impact rates and capacity in the insurance market in 2016.

The percentage of businesses purchasing commercial insurance increased in the second quarter of 2015, according to the latest Commercial P/C Market Index survey from the Council of Insurance Agents & Brokers (CIAB).

An overwhelming 90 percent of brokers responding to the survey said that take-up rates had increased, in part as premium savings drove interest in new lines of coverage and/or higher limits.

Cyber liability continues to gain traction, brokers noted, and this trend is expected to continue as the cyber insurance market matures, new insurers, products and capacity come to market and as companies realize the true extent of their cyber exposure.

Broker comments came as The Council’s analysis shows that rates declined across all commercial lines in the second quarter, continuing the downward trend from the first three months of 2015.

Premium rates across all size accounts fell by an average of 3.3 percent compared with a 2.3 percent decrease in the first quarter of 2015.

Commercial property, general liability and workers’ compensation premiums were most frequently reported down across all regions, with a slight uptick in commercial auto.

Ken Crerar, president and CEO of The Council said:

As the soft market continues in 2015, carriers are competing for good risks and are willing to work with brokers on price and terms.”

Meanwhile, average flood insurance rates saw an uptick across all regions, most frequently in the Southeast and Southwest regions, the Council noted.

This increase is likely due to premium increases, assessments, and surcharges, mandated by both the Biggert Waters Act and the Homeowner Flood Insurance Affordability Act (HFIAA), which went into effect April 1.

Find out more about business insurance from the Insurance Information Institute (I.I.I.).

Commercial property/casualty prices continued their rise and underwriting remained tight in the fourth quarter of 2012, according to the latest quarterly Commercial P/C Market Index Survey from the Council of Insurance Agents & Brokers (CIAB).

Pricing rose on average at a rate of 5.0 percent, compared with 3.9 percent in the third quarter of 2012, across small, medium and large accounts.

Small account pricing realized the biggest increase quarter-to-quarter: 5.5 percent compared with a 3.7 percent increase in the third quarter of 2012.

I think you can characterize the fourth quarter as more of the same. Carriers were still cautious about the risks they were putting on their books and pushed for price increases where they could get them.Ã¢â‚¬ 

The workersÃ¢â‚¬â„¢ compensation market clearly was in distress in the fourth quarter, according to insurance brokers across the country. One Northeast broker said prices escalated 30 to 50 percent, mostly on large accounts. A Midwest broker said some carriers werenÃ¢â‚¬â„¢t particularly interested in writing workersÃ¢â‚¬â„¢ compensation accounts. Others said monoline coverage was harder to find.

Property prone to catastrophes was also tough to write. In the Northeast where Sandy hit hardest, carriers decreased CAT limits such as flood and wind, while increasing deductibles. Brokers reported similar stories for vulnerable property across the country.

The Council said the general feeling of the market last quarter can be summed up this way: underwriters looked carefully at their potential loss exposures and in some cases were willing to walk away rather than get caught short.