As someone who (perhaps unwisely), likes to bike around New York, I’ve long looked forward to driverless cars. They can’t drive drunk. They won’t drive like reckless teenagers. They won’t threaten to beat me up for ringing my bell (true story).

Even better: they’ll be able to see and avoid me even on a dark and stormy night.

Or so I thought.

As it turns out, bicycles could slow driverless vehicle deployment. Case in point: Holland, land of bicycles.

According to a recent KPMG report, the Netherlands is the country most prepared for autonomous vehicles. The country is actively working to begin autonomous truck platooning on highways; a legal framework has been developed for testing AVs on public roads without a driver; and the country is even preparing a drivers license for AVs.

But whether AVs will ever operate in Holland’s cities is an open question. Because, as an executive quoted in the report put it, “We have a lot of bicycles.” That’s an understatement. According to The Guardian, there are an estimated 22.5 million bicycles for a population of 17 million people.

And unfortunately, as the article notes, bicyclists are unpredictable: “the varying sizes and agility of cyclists, with their sudden changes in speed and loose adherence to the rules of the road, present a major challenge to the [AV] existing technology.”

Such a major challenge, in fact, that KPMG suggests forgetting about ever integrating AVs into a bicycle-heavy environment: just keep AVs and bicyclists separated entirely.

We don’t have as many bicyclists in New York. The city estimates somewhere in the ballpark of 1.5 million casual riders.  But that’s probably enough cycling on our already-crowded, dilapidated streets to put a hold on my dream of a safe, driverless vehicle future. (AVs in Phoenix, meanwhile, have an entirely different problem…)

In the meantime, you would do well to wear a helmet and stop texting!

“They’ll be driving soon,” a friend said recently when I sent him a photo of my two young sons. “Hoping car will do that,” I responded, only half-joking.

But if you think about it, we may not be so far from that scenario and insurers are among those saying sooner, rather than later for self-driving cars.

From across the pond, this:

“Babies born today may never have to take a driving test.”

Axa UK’s chief executive Amanda Blanc told The Telegraph that autonomous vehicles could be on the roads within 15 years.

In preparation Ms. Blanc said it is crucial for the insurance industry to build a framework for what happens in the event of a car accident that is caused by a computer, rather than a human.

“Driverless cars will not be able to take to the roads [without that],” she added.

Insurers know that new technology, particularly the rise of autonomous driving, will drive a big shift in liability claims and they are preparing accordingly.

For example, in our earlier post we reported that Allianz has already started building teams of engineers with experience in automotive and driverless technology.

The Trump administration is set to unveil revised self-driving guidelines within months, according to this Reuters report.

Despite advances in safety, the impact of collision/crash, particularly motor-related, is the main driver of liability loss activity in the United States, according to Allianz’s latest global claims review.

Check out the I.I.I. issues update Self-Driving Cars and Insurance.

Despite advances in safety, the impact of collision/crash, particularly motor-related, is the main driver of liability loss activity in the United States.

The impact of collision/crash accounted for close to half (42 percent) of the value of business liability claims in the U.S., according to the latest global claims review by Allianz Global Corporate & Specialty (AGCS). 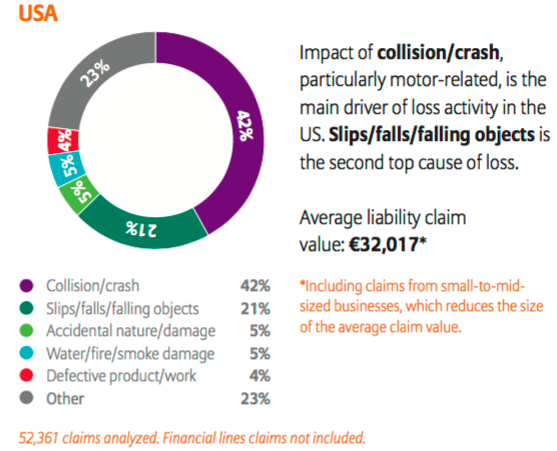 “A decline in car ownership in favor of motor fleets, car-sharing and driverless taxis could see insurers move away from providing millions of single annual motor insurance policies to drivers, instead providing large policies purchased by manufacturers, fleet owners and operators.”

The shift to product liability will require insurers to develop technical expertise and not rely on historic data and driver profiling for pricing. Allianz has already started building teams of engineers with experience in automotive and driverless technology.

”A road traffic accident featuring an autonomous car share vehicle could involve the vehicle manufacturer, software provider and the fleet operator, as well as third parties involved in the accident. This would make liability harder to apportion and claims more complex to settle.”

Over 80 percent of losses arise from these 10 causes: 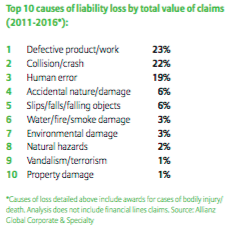