Despite regulatory challenges, privacy concerns and a lack of capabilities that could stall their widespread use, drones could have a significant impact on the property/casualty industry.

A  recent report from IT firm Cognizant suggests that commercial and personal lines insurers that cover property risks are likely to be early adopters of drone technology. Hat tip to Claims Journal which reports on this story here.

For example, a property adjuster or risk engineer could use a drone to capture details of a location or building, and obtain useful insights during claims processing or risk assessments, Cognizant says.

Drones could also be deployed to enable faster and more effective resolution of claims during catastrophes.

Crop insurance is another area where drones could be used — not only to determine the actual cultivatable land, but also during the claims process to understand the extent of loss and the actual yield, reducing the potential for fraudulent claims.

The findings come amid recent reports that several home and auto insurers are considering the use of UAVs.

The Association for Unmanned Vehicle Systems International predicts that within 10 years (2015 to 2025) drones will create approximately 100,000 new jobs and around $82 billion in economic activity, the report notes. 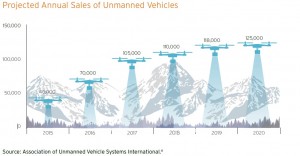 Cognizant believes now is the time for insurers to consider the opportunity that drone technology presents, especially in the areas of claims adjudication, risk engineering and catastrophe claims management:

With drones poised for commercial use, insurers could use them specifically to help reduce operational costs and gather better-quality information. This could help improve the productivity, efficiency and effectiveness of field staff (e.g. claims adjusters and risk engineers), and improve the customer experience by resolving claims faster, especially during catastrophic events.”

Cognizant goes on to note that drone enhancements such as artificial intelligence, augmented reality and integrating audio, text and video already exist in some shape or form. Insurance carriers should expect to see the adoption of drones increase significantly as these features are integrated into standard drones, and as regulations for commercial use of drones are defined.

As insurance carriers build business and technology use cases and the necessary architecture and services, they must consider not only how and where drone technology fits into their digital roadmap but also how the operating model can be enhanced to deliver optimal benefits for the business and its customers.”

Unmanned aerial vehicles (UAV), otherwise known as drones, appear to be moving closer to commercial application, and property/casualty insurers are getting involved.

On the one hand, insurers are looking at ways to use this emerging technology to improve the services they provide to personal policyholders, at the same time they are assessing the potential risks of commercial drone use for the businesses they insure.

The Chicago Tribune this week reported that several home and auto insurers are considering the use of UAVs, and at least one has sought permission from the Federal Aviation Administration (FAA) to research the use of drones in processing disaster claims.

According to Sam Friedman, research team leader at Deloitte, drone aircraft could be the next mobile tech tool in claims management.

In a post on PC360.com, Friedman says that sending a drone into a disaster area would enable insurers to deliver more timely settlements to policyholders and spare adjusters from being exposed to the hazards of inspecting catastrophe claims in disaster areas.

Commercial insurers also have a huge stake in the drone business. In a recent post on WillisWire, Steve Doyle of Willis Aerospace, says businesses need to consider UAV risk issues such as liability and privacy:

Risk managers for organizations that could potentially gain considerable competitive advantage from eyes in the sky should consider the risk issues now so they are ready to advise their organizations as UAV options broaden.”

Insurance is not the only industry eyeing commercial applications. Agriculture, real estate, oil and gas, electric utilities, freight delivery, motion pictures, to name a few are seen as major potential markets for UAVs.

However, the broader commercial use of drones in the U.S. will depend on federal regulators developing appropriate rules. In September the Federal Aviation Administration (FAA) gave the go-ahead for six TV and movie production companies to use drones for filming.

In his WillisWire post, Doyle notes that regulation is a key element to the successful widespread development of the drone industry in the U.S. given the complexities of the liability environment, the crowded skies over metropolitan areas, and the variety of UAVs and their uses.

One thing’s for sure, when UAV use takes off in the U.S., insurers  are ready to  support this emerging technology both as risk takers and risk protectors.