On May 8 the Labor Department reported that the U.S. labor market lost a historic 20.5 million nonfarm jobs in April, sending the unemployment rate to 14.7 percent. The worst affected sectors are leisure and hospitality, which lost 7.7 million workers.

Dr. Steven Weisbart, Triple-I’s chief economist, points out that the employment data for March 2020* for the insurance industry are startling largely because they are at odds with employment changes in many other lines of work.

* The insurance industry/sector-specific data are not seasonally adjusted and are one month behind the national data.

On a seasonally-adjusted basis, the number of people working for property/casualty (p/c) insurers has been dropping continually for two years (since February 2017), from 551,200 to 520,700 (the preliminary estimate for February 2019).

Seasonal adjustment plays a small part in determining these numbers. The not-seasonally-adjusted p/c carrier employment for February 2017 was 549,500, and the February 2019 preliminary estimate was 518,600.

What’s going on? Is this a trend? Based on the numbers alone, it’s hard to tell. Consider the following graph of seasonally-adjusted p/c carrier employment since January 2011 — 18 months after the official end of the Great Recession:

Don’t be misled by the spike in March 2015-March 2016. This is how the Bureau of Labor Statistics incorporates a change in classification—that is, in this case, some people who were previously not considered employed by p/c carriers were, as of March 2015, now considered as employed in this industry. Rather than an instant change, the adjustment is made over twelve months beginning and ending in March.

Although we don’t readily have policy counts over that span, it is reasonable to assume that, with growth in the population and the economy, p/c carriers are growing, and doing so with fewer employees. It is likely that at least some of this is due to the use of digital methods for activities that humans previously did. P/C carriers are becoming more productive. 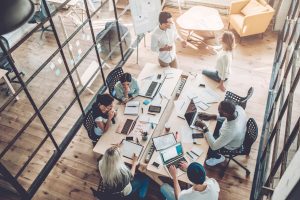 Data for the last few months are preliminary and are often revised later, but revisions are usually small. 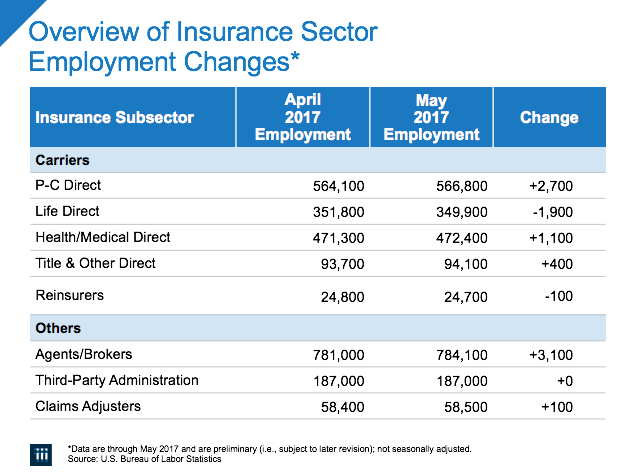 Some of the key takeaways:

—In November 2016, on a year-over-year basis, employment in most segments of the insurance industry was up to varying degrees. Commentary by Dr. Steven Weisbart, chief economist for the I.I.I.:

—Employment at independent claims-adjusting firms on a year-over-year basis for November 2016 rose by 2,400 (4.2 percent) to 59,200—the highest employment level seen for this segment in at least 25 years.