The World Economic Forum (WEF) is calling for a redoubling of efforts to protect and strengthen systems of global collaboration in the face of increasingly disruptive risk trends.

In its just-released Global Risks Report 2017, the WEF warns that risk drivers such as income inequality, polarization of societies, and climate change need to be addressed collaboratively if solutions are to be found to the world’s most complex problems.

Nowhere is cooperation more urgent than in addressing climate and environmental risks, the WEF said. While important strides have been made in the past year, the pace of change is not fast enough and more needs to be done.

The WEF cited the Paris Agreement on climate change now ratified by 110 countries, and the landmark agreement to curb CO2 emissions from international aviation as important examples of global cooperation in 2016.

But political change in the United States and Europe is putting this progress at risk.

“This is a febrile time for the world. We face important risks, but also opportunities to take stock and to work together to find new solutions to our shared problems. More than ever, this is a time for all stakeholders to recognize the role they can play be exercising responsible and responsive leadership on global risks.”

The environment dominates the global risks landscape outlined in the WEF report, with extreme weather events emerging as the single most prominent global risk and climate change the number two underlying trend this year.

Society is also not keeping pace with technological change, the WEF noted. While new and emerging technologies can provide solutions they also exacerbate risks. 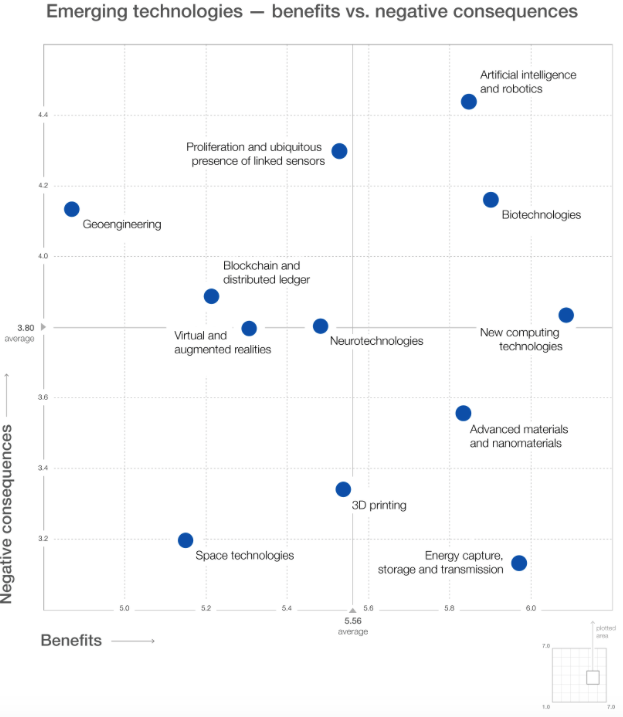 Artificial intelligence and robotics were identified as having both the highest potential for negative consequences and also the greatest need for better governance in this year’s risk survey.

The private and public sectors need to work together and collaborate to address the challenges of the Fourth Industrial Revolution, the WEF said.

“It is critical that policy-makers and other stakeholders – across government, civil society, academia and the media – collaborate to create more agile and adaptive forms of local, national and global governance and risk management.” 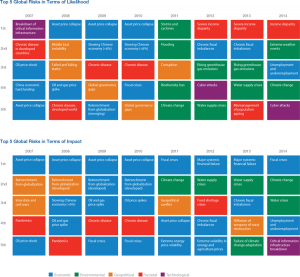 Respondents to the survey worry that further economic shocks and social upheaval could roll back the progress globalization has brought, and that the worldÃ¢â‚¬â„¢s institutions are ill-equipped to cope with todayÃ¢â‚¬â„¢s interconnected, rapidly evolving risks.

Chronic fiscal imbalances and severe income disparity are the risks seen as most prevalent over the next 10 years, the WEF reports.

These risks in tandem threaten global growth as they are drivers of nationalism, populism and protectionism at a time when the world remains vulnerable to systemic financial shocks, as well as possible food and water crises.

Published in cooperation with Marsh & McLennan Cos, Swiss Re, the Wharton Center for Risk Management and Zurich, Global Risks 2012 draws on the insights of 469 experts and industry leaders around the world.

This yearÃ¢â‚¬â„¢s findings indicate a shift of concern from environmental risks to socioeconomic risks compared to a year ago.

For the first time in generations, many people no longer believe that their children will grow up to enjoy a higher standard of living than theirs. This new malaise is particularly acute in the industrialized countries that historically have been a source of great confidence and bold ideas.Ã¢â‚¬ 

The report analyzes three major risk cases: Seeds of Dystopia; Unsafe Safeguards and the Dark Side of Connectivity.

It also highlights Ã¢â‚¬Å“X FactorÃ¢â‚¬  risks, the wild card threats which warrant more research, including a volcanic winter, cyber neotribalism and epigenetics (the risk that the way we live could have harmful inheritable effects on our genes.

The three risk cases, Japan and X Factors are the focus of special sessions at the World Economic Forum Annual Meeting 2012 in Davos-Klosters, Switzerland, which begins January 25.

The world is in no position to face new, major shocks, as the financial crisis has reduced global economic resilience and governments lack the capacity to respond, according to the World Economic Forum (WEF).

The warning comes in the WEFÃ¢â‚¬â„¢s Global Risks Report 2011, released ahead of the WEF annual meeting in Davos-Klosters, Switzerland, which begins January 26.

Global governance systems are failing to deal with global risks and new systems are needed, the WEF says:

The WEF also warns that economic imbalances and unfunded liabilities contain the seeds of potential future fiscal and financial crises and will require concerted coordinated action to manage them:

Savings and trade imbalances within and between countries are increasingly unsustainable while unfunded liabilities create extreme long-term pressure on fiscal positions. One way out of these imbalances would be coordinated global action but this is challenging given the conflicting interests of different states.Ã¢â‚¬ 

The report identifies economic disparity as one of the most important risks in the coming decade. Its findings suggest economic disparity is tightly interconnected with corruption, demographic challenges, fragile states, global imbalances and asset price collapse.

According to the WEF, three risk clusters of particular concern are the relationship between illicit trade, crime, corruption and state fragility; a set of interconnected risks tied to water, food and energy; and risks related to global macroeconomic imbalances.

Other top risks identified by the WEF include: cyber-security; demographic challenges; resource security; retrenchment from globalization; and weapons of mass destruction.

Published in cooperation with Marsh & McLennan Cos, Swiss Re, the Wharton Center for Risk Management and Zurich, Global Risks 2011 draws on the insights of 580 leaders and decision makers around the world.