Ever wonder how much Hurricane Andrew would cost insurers if it struck today? A timely report from catastrophe risk management and modeling firm Karen Clarke & Co (KCC) has the answer.

According to KCC estimates, Hurricane Andrew would be three times as costly in 2012, causing close to $50 billion in insured losses today, compared to $15.5 billion when it occurred in 1992.

In fact, KCC has mapped out the landfall points of all 28 historical hurricanes that would cause $10 billion or more in insured losses today. 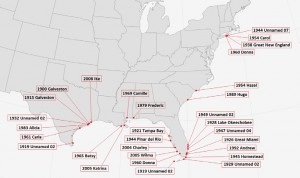 A couple of things jump out from this map and the report.

First, Florida has a target on its back. KCC notes that almost half Ã¢â‚¬“ 13 out of 28 Ã¢â‚¬“ of the historical hurricanes causing insured losses of $10 billion or more made landfall in Florida. Florida also has the largest loss Ã¢â‚¬“ $125 billion from a repeat of the 1926 Great Miami Hurricane.

Another interesting fact from KCC is that there are three historical Northeast hurricanes that would cause $10 billion or larger in insured losses today versus just two in the Southeast.

TheÃ‚  upshot isÃ‚  that the U.S. is likely to experience a $10 billion or larger insured loss one year out of four on average:

Here are some additional facts and statistics on hurricanes from the I.I.I.

As the fifth named storm of the 2012 Atlantic hurricane season made landfall last night on the Yucatan Peninsula, far from U.S. coastlines, we take you back to 1992 Ã¢â‚¬“ a late-starting season that saw only six storms beginning with the historic Hurricane Andrew.

HereÃ¢â‚¬â„¢s a satellite animation of AndrewÃ¢â‚¬â„¢s path across Florida and into Louisiana, courtesy of NOAA Visualizations:

A new paper, Hurricane Andrew and Insurance: The Enduring Impact of an Historic Storm, authored by Lynne McChristian, Florida representative for the Insurance Information Institute (I.I.I.), points out that the cost of Hurricane Andrew is only part of its legacy:

The storm revealed that FloridaÃ¢â‚¬â„¢s vulnerability to hurricanes had been seriously underestimated, and that wakeup call was responsible for many of the insurance market changes that have occurred in coastal states over the last two decades.Ã¢â‚¬ 

In its analysis, the paper outlines six key insurance market changes attributed to the costliest disaster in Florida history:

— Greater use of reinsurance capital from around the world.

— The birth and rapid evolution of sophisticated catastrophe modeling.

— Strong support for strengthened building codes and the importance of enforcement of these codes, as well as enhanced understanding of the necessity of mitigation.

ItÃ¢â‚¬â„¢s worth noting that insurance claims payouts for Andrew totaled $15.5 billion at the time ($25 billion in 2011 dollars), and it remains the second costliest U.S. natural disaster, after Hurricane Katrina, which hit in 2005.

A repeat of Hurricane Andrew on its 20-year anniversary would produce more than twice the losses of the 1992 storm, as much as $57 billion in insured losses, according to estimates by AIR Worldwide Corp.