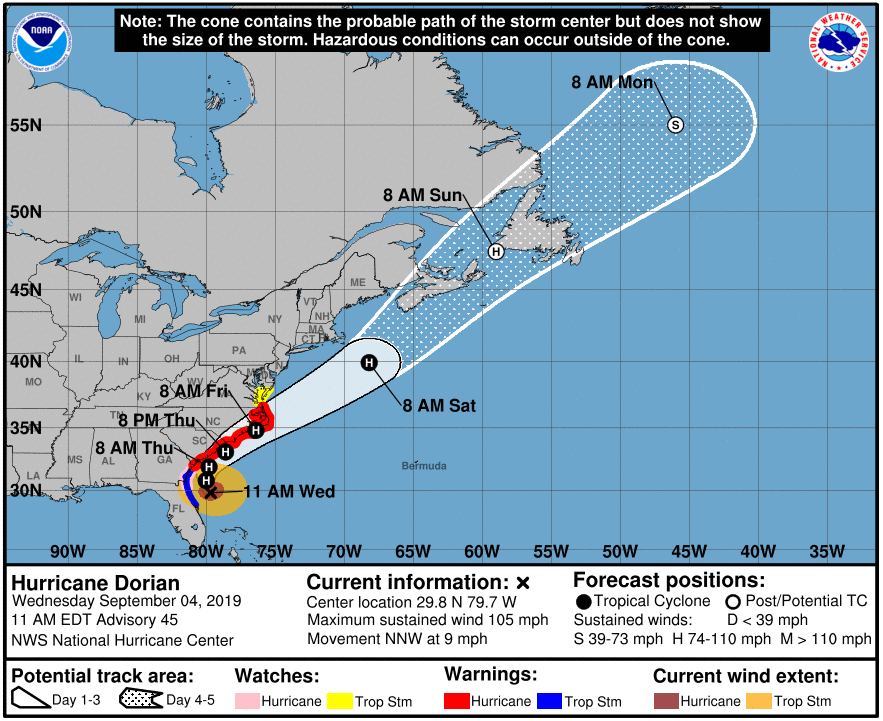 As of early afternoon on September 4 Hurricane Dorian was approximately 100 miles off the east coast of Florida. The National Hurricane Center reported that Hurricane Dorian would likely move slowly up the Florida coast to Georgia and the Carolinas. While the storm’s intensity has declined since it struck the Bahamas as a Category 5 hurricane, Dorian is now classified as a Category 2 hurricane with sustained winds of 105 mph.

Federal emergency declarations are in effect for Florida, Georgia, South Carolina and North Carolina, and the governor of Virginia also declared a state of emergency. Dorian is expected to maintain its current intensity for the next few days, and forecasters said that those in Northeast Florida to the Carolinas should be on alert for the possibility of destructive winds and flooding from heavy rains or storm surges.

Dr. Phil Klotzbach, a meteorologist at Colorado State University and Insurance Information Institute non-resident scholar, is providing regular updates on Dorian via Twitter. He said that the storm has now generated the ninth-most accumulated cyclone energy by an Atlantic hurricane named during August in the satellite era (since 1966).

In a Fox Business interview, Michael Barry, senior vice president and head of media relations and public affairs at the Insurance Information Institute, said,“The industry is very well capitalized and has the financial wherewithal to pay whatever claims comes its way. Of course, right now, we’re looking at the priority of making sure everybody’s customers are safe and sound.”

An Artemis blog post said that even if Dorian remains just offshore, some sources expect a low-single digit billions market loss from the hurricane, just from wind and surge damage along its track. That figure would rise with every mile closer to shore the eye of Hurricane Dorian comes.. Any wobble west onto shore or a full landfall could raise the potential insurance, reinsurance and insurance-linked securities (ILS) market impact significantly.

Recovery from Dorian in the Bahamas and other islands of the Caribbean that were impacted is expected to be slow because most of the damage caused by the storm is not covered by insurance. In a Wall Street Journal article, Steve Bowen, a meteorologist and head of catastrophe insights at Aon plc, said that commercial businesses have the highest levels of insurance penetration in the Bahamas, while many individuals lack coverage.

Jonny Urwin, an analyst with UBS Group AG, said it estimates that insured damage in the Bahamas could be between $500 million and $1 billion. For the storm overall, UBS projects that the total insured losses from Dorian could be between $5 billion and $10 billion, basing its estimate on a comparison with Hurricane Matthew, which followed a similar path in 2016.