Pictures are often more powerful than words and so it is as we mark the first anniversary of Hurricane Sandy. 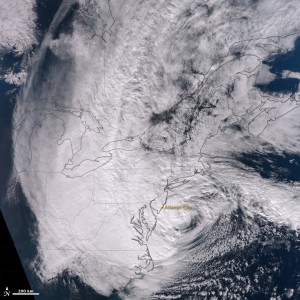 Remember that over a dozen states were impacted by Hurricane Sandy which caused $18.75 billion in insured property losses, excluding flood insurance claims covered by the National Flood Insurance Program (NFIP), according to estimates from ISOÃ¢â‚¬â„¢s PCS unit as of January 18, 2013.

The photographs and findings document the scope and severity of damage and economic impact of Superstorm Sandy over affected regions across the Northeastern U.S., an area that produces approximately 10 percent of U.S. economic output.

And over at NOAAÃ¢â‚¬â„¢s Ocean Service, you can compare aerial images of New Jersey captured shortly after Sandy passed over the Eastern Seaboard with new pictures of restored areas.

Mashable has also taken some of the most iconic photos from Hurricane Sandy and juxtaposed them with images of the same places today.

Meanwhile, the New York Times Lens blog tells of a photography exhibit and book showing the impact of the Hurricane Sandy on the city and its residents.

With two months to go to the one-year anniversary of Hurricane Sandy, a federal task force created after the storm has issued a report thatÃ¢â‚¬â„¢s getting a lot of media coverage.

The plan includes 69 policy initiatives, of which a major recommendation is to build stronger buildings to better withstand future extreme storms amid a changing climate.

Shaun Donovan, secretary of the U.S. Department of Housing and Urban Development, and chair of the task force, notes:

Last year alone, there were 11 different weather and climate disaster events across the United States with estimated losses exceeding $1 billion each. We know that every dollar we spend today on hazard mitigation saves us at least $4 in avoided costs if a disaster strikes again. By building more resilient regions, we can save billions in taxpayer dollars.Ã¢â‚¬ 

The report makes clear that rebuilding to outdated standards is no longer an option given the impact of climate change and rising sea levels:

No single solution or set of actions can anticipate every threat, but decision makers at all levels must recognize that climate change and the resulting increase in risks from extreme weather have eliminated the option of simply building back to outdated standards and expecting better outcomes after the next extreme event. There is clear evidence at the national level that investments made to mitigate risk have achieved significant benefits.Ã¢â‚¬ 

One section of the plan focuses on addressing insurance challenges, understanding and affordability.

As the United States braces for another drought in the coming months, Swiss Re reports that record heat and extremely dry weather conditions in the United States in 2012 led to one of the worst droughts in recent decades and the highest ever recorded loss in agriculture insurance.

Severe crop failures in the U.S. Corn Belt resulted in insured agricultural losses of $11 billion. This makes the 2012 drought the highest ever recorded loss in agriculture insurance history.Ã¢â‚¬ 

Swiss ReÃ¢â‚¬â„¢s latest sigma study reveals that worldwide natural catastrophes and man-made disasters in 2012 caused insured losses of $77 billion Ã¢â‚¬“ making 2012 the third most costly catastrophe year on record. Still, this is significantly lower than 2011 when record earthquakes and flooding in Asia Pacific caused insured losses of over $126 billion, the highest ever recorded.

Hurricane Sandy was the most costly event for the year, causing $70 billion in economic losses and $35 billion in insured losses (of which $20 billion to $25 billion was covered by private insurers and the remainder by the National Flood Insurance Program (NFIP)).

In fact, nine of the 10 most expensive insured loss events happened in the U.S. in 2012. Fortunately, the high insurance penetration in North America meant that $65 billion Ã¢â‚¬“ over half of the $119 billion in economic losses in the region Ã¢â‚¬“ were covered by insurance.

As we basked in 70 degree temperatures in parts of the Northeast on Sunday, just a few days in the wake of a norÃ¢â‚¬â„¢easter and nearly two weeks after Hurricane Sandy, itÃ¢â‚¬â„¢s understandable that the topic of climate change is trending online.

In a post over at the Wall Street JournalÃ¢â‚¬â„¢s Metropolis blog, Eric Holthaus asks the direct question: did climate change factor into recent storms?

He cites the connection between long-term sea level rise and the enhanced coastal flooding that devastated parts of Greater New York as evidence of a much clearer link between Sandy and climate change.

New York HarborÃ¢â‚¬â„¢s average water level is now 12 to 18 inches higher than it was in the 1880s, Holthaus says, and scientists estimate about 8 to 12 inches of that is a direct result of global warming. So, more people were affected in the tri-state during Hurricane Sandy than would have been if the same storm had struck in a world without climate change.

For the victims of Hurricane Sandy, it may come as little consolation, but history may show them to beÃ¢â‚¬”with absolute certaintyÃ¢â‚¬”among the first people in the United States directly affected by climate change.”

In another post over at Scientific AmericanÃ¢â‚¬â„¢s Observations blog, Mark Fischetti writes that scientists, journalists and even insurers are starting to drop the caveats, and simply say that climate change is causing big storms.

Fischetti suggests that as scientists collect more and more data over time, more of them will be willing to make the same data-based statements.

A recent study by Munich Re reported that North America was most affected by the rising number of natural catastrophes. Specifically, it noted a nearly five-fold increase in the number of weather related loss events in North America for the past 30 years, compared with an increase of 4 in Asia, 2.5 in Africa, 2 in Europe and 1.5 in South America.

In a press release announcing the study, Munich Re said:

Up to now, however, the increasing losses caused by weather related natural catastrophes have been primarily driven by socio-economic factors, such as population growth, urban sprawl and increasing wealth.Ã¢â‚¬ 

Check out I.I.I. information on climate change and insurance.

As a resident of Essex County, New Jersey, itÃ¢â‚¬â„¢s been a surreal week. Superstorm Sandy caused damage in U.S. East coast communities from Virginia to Maine, but especially in the New York/New Jersey region.

Latest estimates from catastrophe modeler Eqecat put insured losses at up to $20 billion and total economic damage at up to $50 billion.

Eqecat said a number of factors influenced its revised estimates including large electric and utility losses that will trigger significantly more insured losses (business interruption) than were expected.

As my neighbors deal with downed trees, damaged homes, lack of power/heat and food spoilage, IÃ¢â‚¬â„¢ve been asked a few questions on insurance coverage.

1. A tree fell on my house or garage, can I file a claim?

The short answer is yes. If a tree hit your home, that damage is covered under your homeowners insurance policy. If your tree fell on your neighborÃ¢â‚¬â„¢s home or garage, his or her insurer would pay for the damage; however, if the felled tree was poorly maintained or diseased and you took no steps to take care of it, their insurer may seek reimbursement from you for the damages. Homeowners insurance policies do not pay for removal of trees or landscaping debris that did no damage to an insured structure.

2. The power went out during the storm and I had to throw out all the spoiled food in the refrigerator and freezer, is this covered?

Following a hurricane, some insurance companies may include food-spoilage coverage, usually for a set amount that can range from $250 to $500 per appliance. Check with your agent or insurance company.

3. Should I still file a claim if I think the damage is less than my deductible?

Yes. Sometimes there may be additional damage that becomes evident in the months following a significant storm. Filing a claim, even if the damage total is under your deductible, will protect you in the event further repairs are needed. And if your home suffers damage from more than one storm in a single season, the damage from the first storm may apply toward the deductible amount.

As Hurricane SandyÃ¢â‚¬â„¢s #Frankenstorm tag gathers momentum on Twitter, so does the size of the actual storm.

In its 8am EDT outlook, the National Hurricane Center (NHC) noted that tropical storm force winds extend outward up to 275 miles from the center and that SandyÃ¢â‚¬â„¢s wind field is expected to grow in size during the next couple of days.

Sandy is currently a Category one hurricane on the Saffir-Simpson hurricane wind scale, but some weakening is possible during the next day or so, the NHC said.

The current forecast track from the NHC brings Sandy to landfall along the Delaware/New Jersey coastline early Tuesday (see below).

Regardless of the exact track of the storm, these images show the size of the wind and rain event that the U.S. east coast can expect.

Check out iii.org for answers to all yourÃ‚  insurance coverage questions.