There is remarkable good news on the auto insurance front— auto insurance prices have been trending downward since February 2018, and are now below the general inflation rate, but no one seems to have noticed.

The vast majority of consumers in America buy auto insurance, so the Bureau of Labor Statistics calculates a price component for it each month as part of the various versions of the Consumer Price Index (CPI).[1]

But insurance, like many products and services, is a difficult product for which to calculate a price. Ideally, one would want to determine only the change in the amount a consumer would pay to buy the exact same thing today as he/she would have paid in a prior time period. The challenge, with auto insurance as with many other products, is matching “the exact same thing” from a prior period. With cars, BLS tries to remove the effect on price changes of changes in features in new models that differ from prior models.

With auto insurance, the main reason premiums change from one period to another is insurers expectations for claims in the policy period. Obviously, changes can also be affected by expected investment results and by expense issues such as reinsurance prices. BLS has no way to account for these effects. It does try to standardize its calculation by using a hypothetical group of policyholders applying for a specified set of coverages and asking a panel of insurers to provide quotes for them.

So when, in 2016 and 2017, claims frequency ended its long downward trend and spiked upward, it was not surprising to see the BLS auto insurance price index rise as well. Figure 1 shows what this looked like (comparing prices in the current month to the same month in the prior year, seasonally adjusted by BLS): 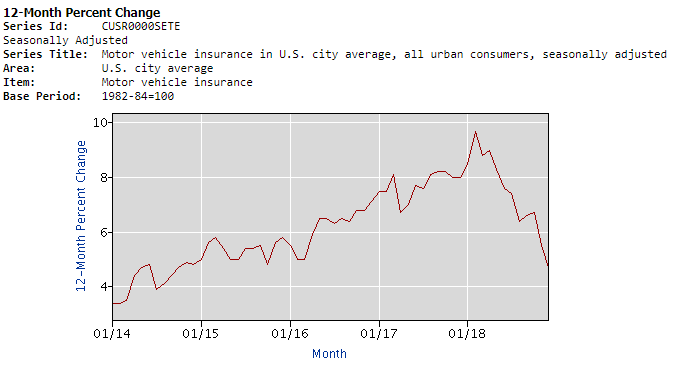 The peak price change reached 9.7 percent in February 2018. But the spike in frequency ended, and you can see in Figure 1 that year-over-year price changes for auto insurance started trending down, ending the year at an increase rate of 4.7 percent.

The downward trend has continued into 2019. Figure 2 shows the results through April: 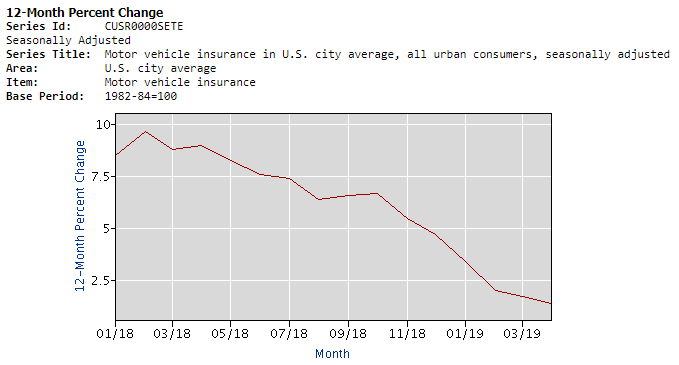 BLS says that the April 2019 auto insurance price is only 1.4 percent above the price in April 2018. This is not only below the rate of general inflation which, depending on how you measure it, has been running at roughly 2 percent for several years, but it is also the lowest year-over-year increase in auto insurance prices in over a decade (the last time the rate of increase was this low was in March 2008—also 1.4 percent).

So where are the headlines?