While ridiculous sounding lawsuits are common in our litigious society, some stand out because they sound so preposterous they could have been the plot of a “Seinfeld” episode.

For example, in 2019 an infamous Long Island attorney nicknamed the “Vanilla Vigilante,” sued Whole Foods for $5 million, claiming the store’s vanilla soy milk is flavored with ingredients in addition to vanilla. The American Tort Reform Association (ATRA) highlights this case and others as part of Lawsuit Abuse Awareness Week (October 5-9).

Food disappointments appear to be a common theme among these suits:

Such cases are fun to laugh about, but increasing willingness of plaintiffs to bring suits of all kinds – and of juries to pay out large settlements, known as “nuclear verdicts” – feeds the phenomenon of social inflation, which drives up claims costs for insurers and premiums for policyholders.

ATRA warns that a wave of such lawsuits is expected against businesses as they reopen during the ongoing COVID-19 pandemic.

The policymaking arm of the American Bar Association (ABA) recently approved a set of best practices for litigation funding arrangements.

Litigation funding is an increasingly popular technique in which investors finance lawsuits in which they are not a party against companies – often insurers – in return for a share in the settlement. It contributes to “social inflation” – rising litigation costs that affect insurers’ claim payouts, loss ratios, and, ultimately, how much policyholders pay for coverage.

The resolution – adopted by the ABA’s House of Delegates by a vote of 366 to 10 – lists the issues lawyers should consider before entering into agreements with outside funders. While it avoids taking a position on the use of such funding, it recommends that lawyers detail all arrangements in writing and advises them to ensure that the client retains control.

“The litigation should be managed and controlled by the party and the party’s counsel,” the report says. “Limitations on a third-party funder’s involvement in, or direct or indirect control of or input into (or receipt of notice of), either day-to-day or broader litigation management and on all key issues (such as strategy and settlement) should be addressed in the funding agreement.”

It also cautions attorneys against giving funders advice about the merits of a case, warning that this could raise concerns about the waiver of attorney-client privilege and expose lawyers to claims that they have an obligation to update this guidance as the litigation develops.

The launch of a new $200 million fund by Pravati Capital this week brings litigation finance firms over the $1 billion mark for funds raised in 2020, according to Bloomberg Law.

A new and risky legal precedent could be set as the coronavirus pandemic continues to roil the U.S. economy. A growing number of policyholders say that insurers are acting in bad faith when they deny claims for losses sustained during shutdowns.

While business income interruption coverage typically covers physical damage to a property, some businesses believe the potential presence of the virus on their property or in their community is equivalent to physical damage.

Business income interruption exclusions for pandemics date back to the 2002-2003 SARS epidemic, when insurers realized that the risk of such a massive health crisis would be impossible to credibly quantify, and thus impossible to absorb.

In several recent articles, some plaintiffs’ attorneys have accused insurers of acting in bad faith by issuing quick denials without properly investigating their claims. “Quite frankly, the prevailing law on the insurance policies is that coverage is supposed to be interpreted broadly and exclusions are supposed to be interpreted narrowly,” said William Shernoff, a founding partner of California-based Shernoff Bidart Echeverria LLP, which specializes in representing policyholders in claims against insurance company denials. Shernoff also stated that any inconsistency in a policy means it’s ambiguous and would result in a decision favoring the plaintiffs.

Michael Menapace, an insurance lawyer and a Triple-I non-resident scholar, disagrees. “They’re trying to recast what the damage is from the policy trigger of “direct physical loss of or damage to property” to a broader concept of “loss of use,” which term does not appear in most policies. They’re also going to claim that somehow the entire insurance industry tricked policyholders by sneaking in the virus exclusion. There is a tension between the plain meaning rule [what the exclusion literally states], and the doctrine of reasonable expectations [the way someone who is not trained in the law would interpret them].” He continued, “When an insurance company denies a claim, they may get the decision wrong – but it doesn’t mean they denied it in bad faith.” Menapace adds that the virus exclusion has not been tested in the courts on any large scale since its adoption in 2006. “There’s so little case law on virus exclusions during pandemics, I have a hard time believing insurers are acting in bad faith.”

There are many reasons for the insurance industry not to act in bad faith under these circumstances. An insurer that is deemed to have acted in bad faith can be liable for damages that are greater than the policy limits, including but not limited to interest, emotional distress, consequential economic losses, attorneys’ fees and punitive damages.

Menapace also makes the point that business income interruption claims from a pandemic would rapidly deplete insurers’ reserves and surplus that are needed for covered losses such as those from hurricanes and other perils. “We can insure certain events because there is a spreading of risk,” saidMenapace. “If everyone has the same loss at the same time, like from a pandemic, we lose the fundamental aspect of insurance, which is risk spreading.”

Much depends on how the courts interpret the exclusions. “Insurers said they were not going to cover damage due to pandemics. There is going to be new law created. It depends whether the courts will read the plain meaning of the exclusion, or if they’ll interpret some of the creative arguments of the plaintiffs.” If these contracts will retroactively favor the insured, Menapace added, it could force insurers to stop covering business income interruption in any scenario, as the costs would simply be too great. And that would be truly bad for policyholders and insurers alike.

Each year the American Tort Reform Association (ATRA) publishes a list of “Judicial Hellholes”  — places where ATRA says laws and court procedures are applied in an “unfair and unbalanced” way in civil cases, usually to the disadvantage of defendants.

Since the issue of social inflation has been trending in recent months, it’s no surprise that the mention of ATRA’s report in our Daily newsletter garnered an unprecedented number of clicks.

Florida — a former number one Judicial Hellhole — doesn’t even make the cut this year.

“Florida took great strides toward improving its legal climate in 2019,” ATRA says “Although there is much work to be done, the election of Governor Ron DeSantis (R) has heralded a sea change in Florida’s legal landscape, beginning with the appointment of several new Florida Supreme Court justices. This new court is deferential to legislative efforts to stop lawsuit abuse and poised to correct the course set by the prior activist court.”

DeSantis in 2019 also signed into law a measure aimed at curbing assignment of benefits (AOB) litigation in the state. AOB is a standard insurance practice and an efficient, customer-friendly way to settle claims. As a convenience, a policyholder lets a third party – say, an auto glass repair company – directly bill the insurer. In Florida, however, legislative wrinkles have spawned a state of affairs in which legal fees can dwarf actual damages paid to the policyholder – sometimes tens of thousands of dollars for a single low-damage claim.

The measure DeSantis signed puts new requirements on contractors and lets insurers offer policies with limited AOB rights, or none at all. But it excludes auto glass repairs. The number of auto glass AOB lawsuits statewide in 2013 was over 3,800; by 2017, that number had grown to more than 20,000. 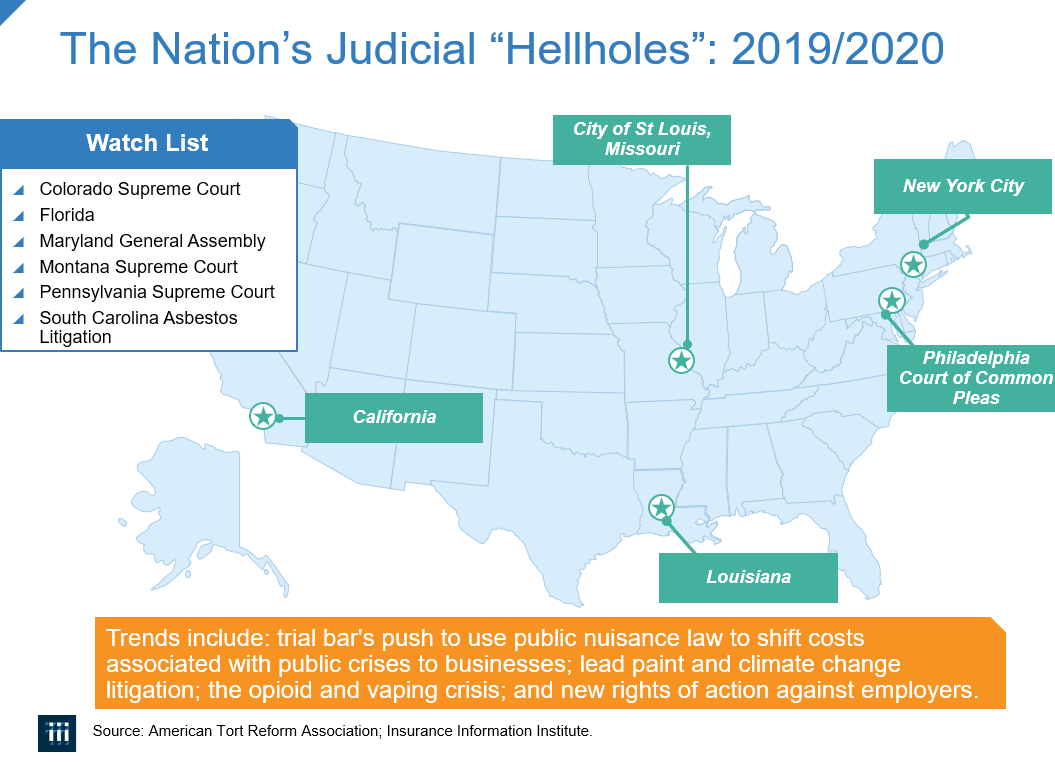 This year, the Philadelphia Court of Common Pleas took over the top spot for 2019. It is one of the preferred jurisdictions for asbestos litigation and home to an $8 billion product liability verdict. California, New York City, Louisiana, and St. Louis all rank in the top five.

Some of the trends noted in the ATRA report include:

Romanucci said the number of civil lawsuits filed in Illinois has been declining since 2010 and was down 47 percent. And medical malpractice cases have dropped 32 percent since 2003.

I once took an Uber in Fairfield, Ohio. As we sat at a light, the driver pointed to an empty big box storefront.

“What’s that building look like?” he asked. I said it looked like an empty big box storefront.

“That’s right. You know where it went?” I said no, confused. He pointed down the street a few hundred yards away to a brand-new big box store.

“There it is. You know why they moved down the street? Taxes. Lower sales tax across the county line.”

I was reminded of that story of fiscal competition at its finest when reading about Apple’s recent decision to close two of its stores in the Dallas suburbs.

Or more accurately, as Ars Technica reported, Apple’s decision to close two stores within the federal court jurisdiction of the Eastern District of Texas. Rumor has it that Apple’s move could be in response to intellectual property litigation. Per Ars Technica:

The Eastern District is known for its extremely patent-friendly judges, and so for decades patent plaintiffs have set up shop there and sued defendants located all over the country. Prior to 2017, the law allowed a plaintiff based in the Eastern District of Texas to sue defendants there if defendants had even tenuous connections to the district. And, of course, a company of Apple’s size has business ties to every part of the country.

These plaintiffs are often called “patent trolls,” which the Electronic Frontier Foundation defines as companies or individuals that cheaply purchase patents (often “overbroad and vague” patents, at that) and then threaten expensive litigation against companies allegedly in violation of said patents:

These letters threaten legal action unless the alleged infringer agrees to pay a licensing fee, which can often range to the tens of thousands or even hundreds of thousands of dollars.

Many who receive infringement letters will choose to pay the licensing fee, even if they believe the patent is bogus or their product did not infringe. That’s because patent litigation is extremely expensive — often millions of dollars per suit — and can take years of court battles. It’s faster and easier for companies to settle.

The Eastern District has been a favorite venue for this kind of litigation – even after the Supreme Court sought to rein in so-called “venue shopping” in a 2017 decision. Ars Technica explains:

[U]nder the Supreme Court’s 2017 TC Heartland decision, a defendant can only be sued in a district where it “resides”—meaning where it was incorporated—or “has a regular and established place of business.”

Apple has not confirmed that its move is related to patent-troll litigation. But, tellingly, the company is replacing its two shuttered stores with a new store…directly across the border of the Eastern District. Sometimes, the best offense is a good defense.