Brexit and Lloyd’s of London

The latest (but perhaps not the last) Brexit deadline is set for January 31, 2020. Yet the insurers most affected by the U.K.’s divorce from the European Union (EU) have plans in place to continue business with minimal disruption. Indeed, U.K. businesses have been operating in the EU’s Single Market for so long, many are questioning how these entities will adapt to increased regulations. One entity where these questions are particularly relevant is Lloyd’s of London.

Lloyd’s is not an insurance company, but a marketplace where capital and underwriting converge on a global platform operated by the Corporation of Lloyd’s. Lloyd’s includes five key stakeholders: syndicates, which function as underwriting entities, assuming risks and paying claims; managing agents, who capitalize and operate the syndicates; brokers, who are intermediaries between policyholders and syndicates; coverholders, which are local MGA’s that underwrite risks on behalf of a syndicate/managing agent (and which also enables the Lloyd’s market to operate globally without establishing local offices); and insurance buyers, many of whom buy insurance through Lloyd’s for complex, emerging or otherwise unique risks. Syndicates specialize in different types of insurance and reinsurance, often participating with each other on a subscription basis (meaning they only take on a part of the risk and pay part of the claim).

With gross global premiums written at almost $45 billion in 2018, 13 percent of that generated by the post-Brexit European Union, there were legitimate concerns about how Brexit would affect Lloyd’s role in the EU marketplace. Due to Brexit, “non-admitted” U.K. insurers will no longer be able to conduct insurance business in some EU countries, meaning that nonauthorized insurers cannot conduct business in regulated insurance industries in a different market (which is currently the case in France, Italy, and under certain circumstances, in Germany).

However, Lloyd’s quickly pivoted to ensure that it will continue to provide non-life insurance throughout the European market, regardless of Brexit’s outcome. Although it is anticipated that most of the European Economic Area (EEA) reinsurance will still be written through London on a cross-border basis, in case of a hard Brexit non-life insurance could  be covered by Lloyd’s Brussels, which opened in 2018.

Still, non-EU coverholders for Lloyd’s of London—who could previously conduct business throughout the EU without physical offices and permissions from member states—will have to seek proper authorization from the EEA under a “Coverholder Appointment Agreement” (CAA) with Lloyd’s Brussels. This may affect where managing agents raise capital.

Will these new regulations be felt in the US?

A very substantial portion of Lloyd’s international business—over 40 percent of global premiums as of 2018 —is generated in the U.S., with significant exposure on the U.S. insurance lines. While the new regulations will not directly affect business between the U.S. and U.K., the primary concern will be the volume of business in the EEA, which could potentially decrease. But if Lloyd’s pivots some of its business away from Europe, the U.S. could get more attention. In fact, John Neal, Lloyd’s chief executive, stated in an interview with the Financial Times that “If you’re in insurance or investment banking or banking, one dollar in two dollars of everything you do is still U.S. derived, so it’s very important that you maintain your connection and your relevance with the U.S. market.” 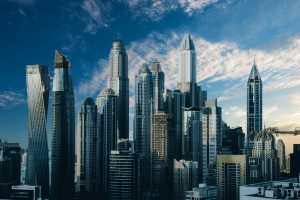 As the world’s population becomes increasingly concentrated in cities, they become more vulnerable to risk events. To understand the risk, Lloyd’s compiled a City Risk Index, detailing the threat landscape for the world’s leading 279 cities.

The index estimates how much economic output (GDP@Risk) a city could potentially lose due to 22 different threats ranging from stock market crash to solar storm.

Here are some highlights from the report:

FedEx Corp has disclosed in a securities filing that its international delivery business, TNT Express BV, was significantly affected by the June 27 Petya cyberattack.

Apparently, the courier company did not have cyber insurance or any other insurance that would cover losses from Petya, according to this report by The Wall Street Journal, via the I.I.I. Daily.

A new emerging risk report from Lloyd’s and risk modeling firm Cyence notes that cyberattacks have the potential to trigger billions of dollars of insured losses, yet there is a massive underinsurance gap.

Take its first modeled scenario: a cloud service provider hack. The event produced a range of insured losses from $620 million for a large loss to $8.1 billion for an extreme loss (overall losses ranged from $4.6 billion to $53 billion).

This left an insurance protection gap of between $4 billion (large loss) and $45 billion (extreme loss), so between 87 percent and 83 percent of the overall losses respectively were uninsured.

In another modeled scenario, the mass vulnerability attack, the underinsurance gap is between $9 billion for a large loss and $26 billion for an extreme loss, meaning that just 7 percent of economic losses are covered by insurance.

“In some ways, the cyber insurance market can be considered in the same light as underinsurance in the natural catastrophe space – risks are growing and insurance penetration figures are low.”

Is sugar the next tobacco? Liability insurance experts say it could be.

Excessive, but not always obvious use of sugar (also salt) in food has the potential for systemic loss, a recent Lloyd’s report found.

The potential loss scenario unfolds if excessive levels of sugar are found to be harmful by scientific studies and if courts find food producers and/or the distribution chain liable for resulting damages.

“A societal shift may make the addition of significant amounts of sugar to our food unacceptable, with liability risks affecting food manufacturers (and possibly distributors and retailers).”

A sample footprint in the report (below), starting from sugar beet and cane farming to sugar and confectionary manufacturing and spreading to various other food manufacturers, wholesalers, retailers, and food and drink outlets shows the widespread distribution of sugar and the potential impact on many customers: 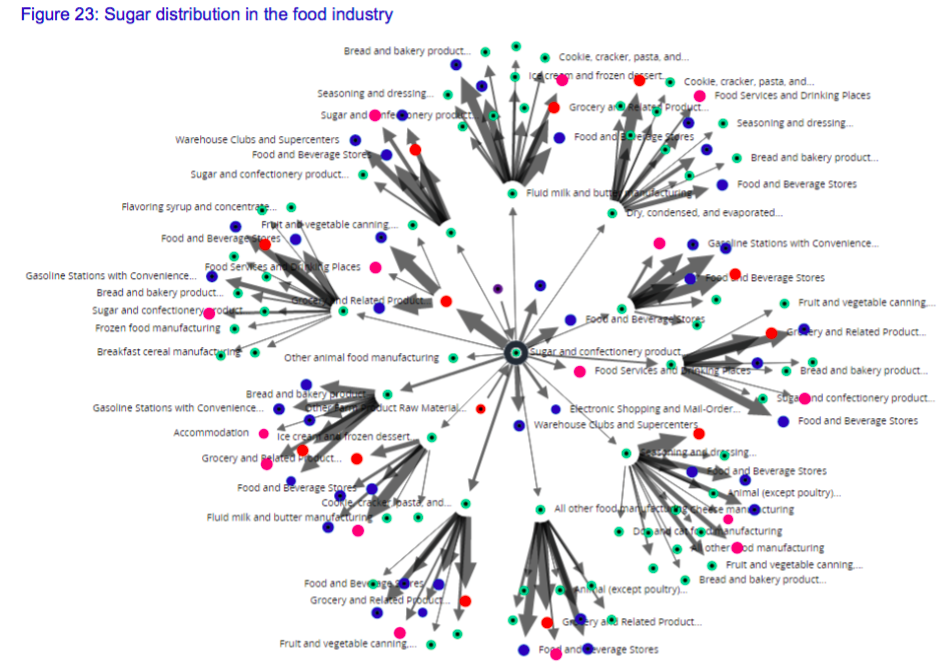 “Historical data suggests that the spread would also be amplified by the presence of large corporates with large insurance cover and funds.”

Businesses address their liability concerns through many types of risk management, of which insurance is an important component, according to the Insurance Information Institute.

A Swiss Re study indicated that the United States in 2013 had the largest commercial liability insurance market in the world both in premium volume ($84 billion) and as a percentage of Gross Domestic Product (0.50 percent).

London, for decades the financial center of Europe, finds itself on the brink of a monumental vote. On Thursday, British voters will decide whether to leave the European Union in what’s known as the Brexit referendum.

The Los Angeles Times reports that while the U.S. economy is better insulated than most from the risk of market turmoil, the Brexit referendum has added to uncertainties in a presidential election year and to lingering concerns about China’s economic slowdown.

A lot of U.S. companies have something to lose if the UK decides to leave the EU, with the banking and insurance sectors among those most likely to be affected, according to this CNBC report.

Some U.S. companies have moved not just parts of their operations but whole headquarters from the U.S. to the UK, CNBC says.

For example, the world’s largest insurance broker Aon, relocated its corporate headquarters to London from Chicago in 2012, in a move designed to give the company greater access to emerging markets through London.

Aon told CNBC in a statement:

“If Britain votes to leave the European Union, the innovative center of excellence that has set London apart in the insurance space will be deeply challenged.

“Talent is a true differentiator for the city of London, and to create a barrier between the industry that addresses the world’s most complex risks and the global talent needed to do this will have real implications.”

If companies lose the ability to passport their services into Europe, they may decide to move their European hubs and staff out of London and the UK, which would lead to significantly higher operational costs.

The London insurance market has been very vocal on why remaining in the EU is the best outcome for insurers.

And the UK’s membership of the EU gives it access to the world’s largest insurance market with a world market share of nearly 33 percent and total insurance premiums of nearly Euros 1.4 trillion ($1.6 trillion).

In a recent paper, Lloyd’s, the International Underwriting Association and Fidelis warned that Brexit poses a significant threat to London insurance jobs and business.

Read more about the insurance sector impact of a Brexit in this analysis by London law firm Clifford Chance.

Aon’s full statement on the EU referendum is available here.

Saturday is International WomenÃ¢â‚¬â„¢s Day and March is WomenÃ¢â‚¬â„¢s History Month so itÃ¢â‚¬â„¢s a good time to talk about gender diversity in the insurance industry.

While women are well-represented across the insurance industry as a whole, there are very few women in the top executive positions.

The fact remains that only 6 percent of C-suite positions (CEO, CFO, COO) in the insurance industry are occupied by women and only 12.6 percent of board seats are held by women, according to a recent study by the Academy of Risk Management & Insurance at St JosephÃ¢â‚¬â„¢s University. 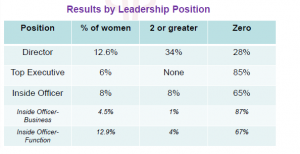 Findings from the SJU study were presented at last yearÃ¢â‚¬â„¢s IICF Women in Insurance Global Conference.

However, the glass ceiling is starting to shatter, as evidenced by the recent appointment of Inga Beale as LloydÃ¢â‚¬â„¢s first female CEO.

Beale took the reins in January and shares her vision for the Lloyd’s market and the challenges and opportunities ahead in this interview at lloyds.com.

IÃ¢â‚¬â„¢ve always enjoyed teamwork and see great benefit in having diverse teams working well together. I therefore do my best to be inclusive, get people involved, particularly when they are the experts, and build solutions and plans together.Ã¢â‚¬ 

Read more about BealeÃ¢â‚¬â„¢s historic appointment in this article by the Financial Times.

For more on women in insurance, Business InsuranceÃ¢â‚¬â„¢s annual feature Women to Watch spotlights 25 women who are doing outstanding work in commercial insurance, reinsurance, risk management, employee benefits and related fields, such as law and consulting.

High taxation has become the number one threat to global business, soaring up the rankings from 13th to 1st place in the last two years, according to the third LloydÃ¢â‚¬â„¢s Risk Index.

Other top risks concerning more than 500 of the worldÃ¢â‚¬â„¢s most senior business leaders in 2013 are loss of customers/cancelled orders, cyber risk, increased material costs and excessively strict regulation.

Interestingly, the survey found that U.S. businesses feel even more unprepared to deal with the risk of high taxation than their European counterparts.

While both regions put high taxation as their number one risk, U.S. respondents rank their preparedness at 37 out of 50, compared to European businesses at 21 out of 50.

But does the increase in volume on the subject of corporate taxation reflect reality? Not necessarily, LloydÃ¢â‚¬â„¢s says.

It cites data showing that corporate taxes have actually declined or remained static in the past few years, despite the financial problems of most major economies.

Still, personal tax rates in some economies have risen, which particularly affect global businesses competing for international talent, it adds. Indirect taxes are also on the increase.

The reality for businesses appears to be that government ambiguity about business taxes, whether about extending jurisdictions, amending legislation or changing rates, may actually be more damaging for business confidence than the reality.Ã¢â‚¬ 

With business tax in the spotlight and rising up the political agenda, executives are understandably concerned. Yet the danger is that an emphasis on near-term, operational issues comes at the expense of significant, strategic decisions that have previously exercised business leaders.Ã¢â‚¬ 

First published in 2009, the LloydÃ¢â‚¬â„¢s Risk Index is run in conjunction with Ipsos MORI.