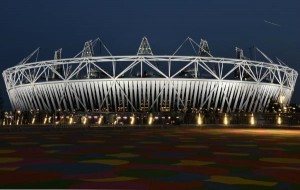 As the final touches are made to the Olympic venues in and around London, let’s take a tour of the insurance stories ahead of Friday’s opening ceremonies.

It should come as no surprise that insurers and reinsurers play an important role in providing billions of dollars in risk coverage for this sporting display that brings together more than 10,000 athletes from some 200 different nations.

Munich Re is shouldering a significant share of the risk in the event of the abandonment, interruption, delay or relocation of the 2012 Games.

Munich Re carries a substantial portion of this risk. If the Games were called off, Munich Re would provide cover of around Ã¢”š ¬350 million [$425.5 million] through several policies. Guaranteeing this amount of cover requires not just financial strength, but also the necessary expertise to allow the risk to be assessed and managed in the best possible way.”

Over at Insurance Journal, an article by Lee Tookey, head of Aviation Reinsurance, Space and Specialty Lines, for Aspen Re speaks to the challenges insurers face in the transmission of the Games to the world.

New technology will allow the live broadcast of sporting events via mobile devices to viewers around the world. There are concerns about whether or not satellites and cellular networks will be able to meet the expected demand.

Some events at the game “most notably the opening and closing ceremonies- are expected to attract audiences around the world numbering perhaps four billion: the insurance industry will certainly play an important role in both terrestrial and extra-terrestrial aspects of these Olympic events as they are transmitted.”

And finally, an article from Business Insurance reminds us of the importance of detailed risk management when hosting a sporting event on this scale.

These are formidable risk exposures including health insurance, cancellations coverage, terrorism, kidnap and ransom, travel insurance and property coverage. There also are exposures surrounding the construction of event venues, dormitories and other facilities.

London’s heightened exposure to terrorist threats during the Games is one of the main areas of concern.  The British government has called in extra troops, police officers and civilian security workers to help keep the Games safe for athletes and spectators.