The ongoing flooding in Louisiana is being described as the worst natural disaster to strike the United States since Superstorm Sandy of 2012.

Latest reports indicate that at least 11 are confirmed dead and more than 30,000 have been rescued. An estimated 40,000 homes have sustained flood damage statewide, but local reports put that figure higher.

Some 20 Louisiana parishes have now received a federal disaster declaration.

Flood damage is excluded under standard homeowners and renters insurance policies, but available as a separate policy both from the National Flood Insurance Program (NFIP) and some private insurers.

According to the I.I.I., superstorm Sandy was the second costliest U.S. flood, based on NFIP payouts as of June 2016.

All these figures are preliminary as claims are still being processed, the I.I.I. notes.

While flood insurance penetration rates are reported to be relatively low in the affected parishes, time will tell how the Louisiana flood stacks up among major U.S. flood disasters.

In 2015 and 2016 the states of Texas, Louisiana, Mississippi, South Carolina and West Virginia have experienced devastating rainfall-induced flooding, resulting in billions of dollars in economic losses.

Here’s a look at the top 10 most significant flood events by NFIP payouts: 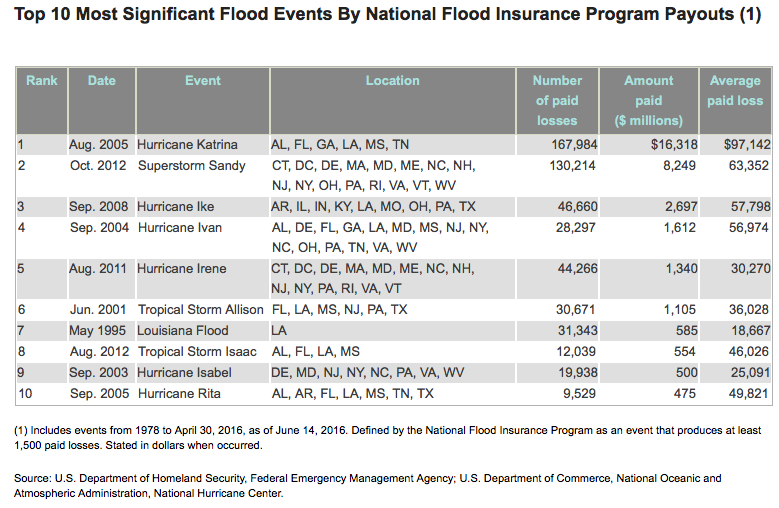 A massive relief operation mounted by the American Red Cross is expected to cost at least $30 million and that number may grow as the scope and magnitude of the devastation in Louisiana becomes clearer.

Check out this I.I.I. issues update on flood insurance for more background on the topic.