UK terrorism reinsurance mutual Pool Re stands ready to respond to any claims arising from last night’s horrific attack at a major concert venue in the city of Manchester.

At least 22 people were killed and more than 50 injured in the bombing as they left the Manchester Arena at the end of an Ariana Grande concert.

“Pool Re will work with its Members in resolving any claim arising from the attack as quickly as possible. We will make a further statement as more information becomes available.”

Most insurers providing commercial property and business interruption insurance in the UK (including many overseas companies and Lloyd’s syndicates) participate in Pool Re.

The government formed the mutual reinsurance pool for terrorist coverage in 1993, following acts of terrorism by the Irish Republican Army.

Last night’s attack comes 21 years after a bombing in Manchester’s main shopping district injured more than 200 people and caused an insured property loss of $966 million (in 2015 dollars). The 1996 Manchester bombing still ranks as the third costliest terrorist attack by insured property damage, according to the I.I.I.

Pool Re is one among a number of public/private risk-sharing schemes around the world that provide terrorism coverage, as discussed in a recent report by Marsh: 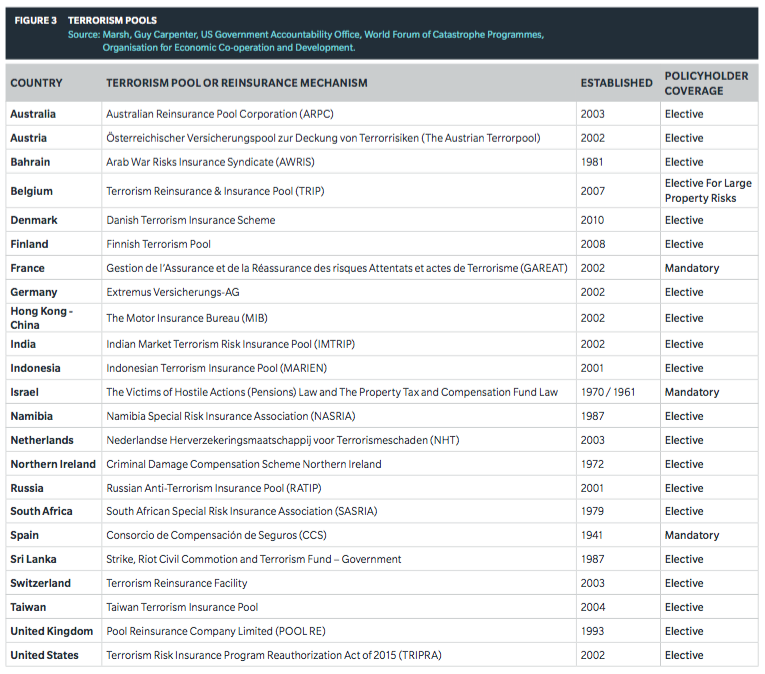 Here’s how the Pool Re scheme works: