Global fatalities from acts of terrorism jumped by 30 percent in the last year even as the number of attacks decreased, according to a new interactive mapping platform from risk analytics firm Maplecroft.

Over the same period there were some 9,471 global terrorism attacks at an average of 26 a day, down from a five-year average of 10,468. This indicates that terrorist methods have become increasingly deadly over the last year, Maplecroft said.

Iraq recorded the highest number of attacks, with 3,158 acts of terrorism resulting in 5,929 fatalities.

China, Egypt, Kenya and Libya are seeing the most significant increases in the risks of terrorist attacks, the Maplecroft Terrorism and Security Dashboard (MTSD) reveals.

The MTSD classifies 12 countries as ‘extreme risk,’ including: Iraq (most at risk), Afghanistan (2nd), Pakistan (3rd), Somalia (4th), Yemen (6th), Syria (7th), Lebanon (9th) and Libya (10th). Many of these countries are blighted by high levels of instability and weak governance, Maplecroft notes.

However, of particular concern for investors, the important growth economies of Nigeria (5th), the Philippines (8th), Colombia (11th) and Kenya (12th) also feature in the category. 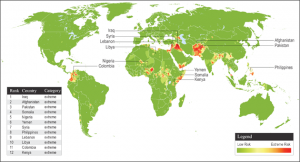 Libya, Kenya and Egypt are among a handful of countries to witness a significant increase in risk in the MTSD and investor confidence in key sectors, including tourism and oil and gas, has been hurt. When faced with rising security costs and decreasing safety for their personnel, companies can, and do, reconsider their country-level commitments.”

The MTSD logs, analyzes and plots all reported incidents of terrorism, piracy, political violence and human rights abuses by security forces down to 100m ² worldwide. It also draws on Maplecroft’s seven years of global data to reveal terrorism and security trends across 197 countries.

Check out I.I.I. facts and stats on terrorism risk.