Online insurance exchange MarketScout reported that rates for commercial insurance in the United States were up slightly in March 2014, extending the slow but steady rate increases business owners have been paying since November 2011.

The composite rate for property and casualty coverages in the U.S. was up 3 percent in March, compared to plus 2 percent in February. 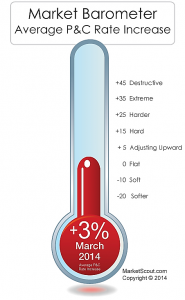 By account size, any account with premium from $25,000 to $1 million paid a 3 percent increase compared to 2 percent the prior month.

Check out I.I.I. information on financial results and market conditions.

Online insurance exchange MarketScout reported that the composite rate for U.S. commercial insurance increased an average of 3 percent in January 2014.

Commercial auto and workers compensation rates led the way with increases of 4 percent.

If we were to post rate changes by fractional increments, you would see the actual increase at 2.55 percent, so the moderation trend continues.Ã¢â‚¬ 

Check out latest information from the I.I.I. on financial and market conditions.

Online insurance exchange MarketScout reported that the composite rate for U.S. commercial insurance slipped to plus 3 percent in December 2013, down from plus 4 percent in November 2013.

Year-end 2013 closed with ample capacity, and additional capacity from new investors in the insurance market may put further downward pressure on rates in 2014, MarketScout noted.

Commercial auto was the most expensive coverage, leading the way with rates up 4 percent.

If you are in favor of significant rate increases in 2014 you may be disappointed sans a catastrophic event or some sort of new tort liability issue. Investors are clamoring for decent returns in instruments not directly connected to the stock market. When this occurs, smart people come up with creative solutions to put these investor funds to work. Insurance Linked Securities (ILS) and new age reinsurance structures have opened the insurance market to many new investors and as a result, additional capacity. This added capacity may well put additional pressure on rates in 2014.Ã¢â‚¬ 

Online insurance exchange MarketScout reports that the composite rate for U.S. commercial insurance held steady at plus 4 percent in November, matching the rates for October 2013.

The market is still on an upward trajectory but rate increases are slowing.Ã¢â‚¬ 

Kerr went on to explain that the only rate increases by coverage classification were small commercial policies (BOP) and general liability coverages, which both increased from plus 3 percent to plus 4 percent.

However, the general liability increase was possibly an adjustment from the unusually large percentage rate reduction in October, Kerr said.

Transportation accounts paid an average plus 4 percent in November as compared to plus 5 percent in October.

Check out latest information on financial results and market conditions from the I.I.I.

MarketScout reported that the composite rate for commercial lines rose 5 percent in September 2013, up from plus 4 percent in August.

These companies may be sold, restructured, or placed into run off unless they structure some creative solutions to get them past their current financial crisis. Very capable, smart insurance executives lead each of these firms. It just goes to show how quickly things can go wrong if an insurer experiences adverse loss development. Rates will increase if a few more companies experience similar deterioration.Ã¢â‚¬ 

By account size, the larger accounts paid less premium than smaller accounts in September, according to MarketScout.

Commercial property insurance led the pack with a rate increase of 6 percent, followed by commercial auto and umbrella/excess with increases of 5 percent.

General liability rates were considerably more competitive with rates up 4 percent, compared to up to 6 percent the previous month.

By account size, rates continue to be more competitive the larger the account, according to MarketScout. Small accounts (premiums up to $25,000) were up 6 percent and jumbo accounts (over $1 million) were up 2 percent.

Online insurance exchange MarketScout just reported that the composite rate for U.S. commercial lines increased by 4 percent in October, a moderation from the 5 percent increase in September 2012.

Richard Kerr, CEO of MarketScout put the results in perspective:

While the composite rate may have moderated in October, we believe Superstorm Sandy will cause a month on month composite rate increase in November. It will take months before we know the magnitude of insured claims, but as time passes, the projection for insured losses continues to increase.Ã¢â‚¬ 

Property, business owners (BOP) and general liability all saw an easing in rates from plus 6 percent in September to plus 5 percent in October.

MarketScout noted that these three coverages represent a large volume of business, thus the drop in the overall composite rate from plus 5 percent to plus 4 percent.

By industry classification, service, habitational and contracting risks were up the most with an increase of 5 percent.

Business InsuranceÃ‚  and PC360 have more on this story.

Further information from the I.I.I. on industry results and market conditions is available here.

A lengthy soft market coupled with the recession is creating a lot of pain for everyone: insurers, reinsurers, agents and brokers, according to Richard Kerr, CEO of online insurance exchange MarketScout.

His comments came as MarketScoutÃ¢â‚¬â„¢s latest analysis reveals the composite rate for U.S. property and casualty insurance was down four percent for September 2010, unchanged from a year ago.

By account size, rates were most competitive for accounts over $1 million in premium (down 5 percent), and by industry, service contractors are enjoying the largest rate decreases (minus 5 percent), according to MarketScout.

General liability was the most aggressively priced product with an average rate reduction of minus 5 percent, followed by commercial property and inland marine at minus four percent.

Everyone is fighting and scratching for market share. If rates donÃ¢â‚¬â„¢t go up soon and the economy remains in the doldrums, the fighting will only get worse.Ã¢â‚¬ 

In August, MarketScout predicted an overallÃ‚  soft market for the balance of 2010, barring a major catastrophic event.

Check out I.I.I. information on the industryÃ¢â‚¬â„¢s financial results and market conditions.